Most Haunted Ghost on Stairs from Episode 2 - Debunked

I wrote nearly a month ago how I thought the ghost on the stairs was simply Glen, he was the only crew member not accounted for, he was off on his own. I believed that he simply was caught on camera, and when they looked back at the footage realised it looks a bit spooky so decided to run with it.

They paid a fortune to get the story in as many media outlets as possible a few days before the show aired on TV (hence why UKTV were so furious with me for spoiling it), and the show aired, and the usual fan reaction was as expected, skeptics said it was just a man walking up some stairs, the believers said it was a ghost, and Yvette herself said it was a Stone Tape replay of Stuart, as ridiculous as that sounds.

Now a few people contacted me saying that the effect was a video overlay. Basically two pieces of footage played together and merged to give the effect.

To be honest I still don't think that is what happened as that would in my opinion be giving too much credit to Most Haunted. I think they just caught Glen on the steps and due to low light, night vision, poor digital quality of the camera etc, it gave it that slight translucent effect. But saying that I am slowly being convinced, especially when I saw this comparison of Stuart and the Ghost. 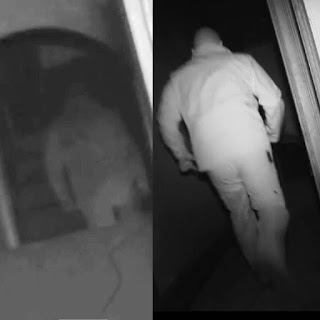 Regardless of that pretty much everyone agrees it is not a ghost.
Well I was tweeted the following "Debunktion" and I thought I would share it as it is quite interesting, and they also point out a rather interesting note. Basically after Most Haunted aired, Yvette and Glen posted a ridiculous 9 minute conversation of them discussing the ghost on the stairs. But more importantly they tried to cut off any discussion of the video being edited, and stated it was raw footage, but guess what, thsoe annoying skeptics on the internet found a major flaw in their own defence. Yes the found that the video HAD indeed been modified, and have the proof.

Watch the video and make up your own mind. I have my own opinions, make sure to leave your comments too.

Excellent work Jon, I love coming here and reading the articles you put up.

I don't watch Most Haunted and the last time I did catch a moment of it they were in a hotel room obviously using a remote to switch a TV on from the bathroom.

Excellent site mate keep it up

I laughed when i saw this, it was Stuart or Glen, the clue was in how they did the camera work just before the 'ghost', This will go on for a long time as i know Fred the Batt has a huge bankroll, and he loves to be on tv, even if he looks like a twat, with his incantations, just like Karl the Sammuri, lol, do they not know how stupid they look, my hubby looks up when i have it on , and says what the f-ck are these clowns doing on my tv, turn it over. Jon, keep it up, so funny.

Absolutely brilliant. Thanks for posting this. It was so obviously Stuart! I didn't know ghosts wore jeans and fleeces. Jeez, they really treat viewers like idiots. I keep watching it just to see what claptrap they come up with next. At least Derek Acorah was comical with his possessions and his "Fanny loves Dick" whereas what Fred Batt self styled demonologist (eh?) brings to the table I'll never know. There are episodes where he never says a word. I've noticed he's sometimes a historian as well as a demonologist. I thought he used to be a night club owner? (Caesar's). I love reading your reviews. They're spot on.