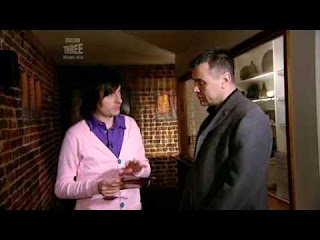 The very excellent Bullshit Detective on BBC3 has come up trumps again with their latest show.

A while back Ciaran O'Keeffe was approached by the program makers, with the idea that they wanted to expose 3 psychics.

Ciaran was asked to come up with a fake story that would be planted onto 'The Chocolate Factory' website, Wikipedia, and also published on some leaflets.

Quote:
Although it’s now a fashionable arts complex, the building did, at one time, house a London chocolate factory. A couple of stories from the 19th Century, when it was a working factory, may help explain some of the haunting experiences that have been reported since.

The Chocolate Factory was dogged with bad luck as soon as it opened in the mid 1870s. Close to a year’s takings were stolen a few days after Christmas in 1878. The management at the time were unable to recover the losses and had to sell stock and some machinery to a rival factory. There were rumours that a local burglar, Charles Pearce, may have been responsible for the burglary. Following the burglary several accidents befell the workers. These ranged from burnt hands due to the ‘conching’ process that came into effect in the early 1880s to broken bones as a result of sloppy cleaning on the factory floor.

The worst accident happened to an American, George Bull, who had managed the factory since its founding. He was a fat, aggressive, ruthless man from Maine, who ruled the company with an iron fist and had accumulated considerable wealth from cutthroat business deals over the years.

Early one morning whilst supervising a delivery he became impatient with the delivery man and grabbed the final crate himself and threw it into the factory where it shattered. In the commotion, the delivery cart’s horses were startled and bolted, crushing George beneath in the process and cutting his legs from the knees down. The driver ran off after the cart and, wanting to avoid reprisals, ran off himself, knowing he was the only witness to the incident. He was caught later by the police who simply logged it as an accident.

Some staff have reported hearing, late at night, the sounds of horses braying and also what sound like horses hooves on cobbled floor. Some stagehands who used to work in the theatre reported times when they heard a loud crash on the stage and rushed to find no-one there, and, nothing smashed on the stage itself. A local ghost group back in 1985 investigated the place and, during a ouija board got the name Otto.

The current owners of the venue have, in the past, kept these stories quiet, not wishing to put off theatre-goers, but now realize that, if anything, it would attract visitors, living that is!


So the BBC now had a great made-up story, they planted it on the Chocolate Factory website, as well as on Wikipedia and on leaflits, all they needed now was to call in 3 of the top psychics in the UK, and let them do the rest.