Was Celebrity Haunted Hotel Live a Success or a Failure? 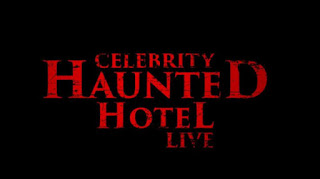 After last year's Most Haunted Live (which you can see HERE) was surrounded by yet more claims of fraud and generally bad publicity all round for UKTV, this year UKTV decided to relegate Most Haunted to a pre recorded online only stream for one night, and replace it with a brand new shiny show called Celebrity Haunted Hotel Live, this was their main test for a replacement show since clearly Most Haunted is not the ratings pull it once was.

First they decided to bring in UK Haunted, a Ghost Hunting group with a dubious track record, but generally quite well regarded by gullible children and middle aged housewives. And then throw in some Z List "celebs", and see what happened.

Unfortunately the very first night the show got exposed for faking, and after that the show never quite got going, just really poor production, boring celebs, and a lack of interest from people which was clear to see on social media.

But all that matters is the ratings as we all know, so was the 5 night spectacular a worthy replacement of Most Haunted Live, or a big pile of stinking horse manure? Lets take a look at the ratings on UKTV Owned channel W.

Note: W has a +1 channel, only Thursdays episode shows as in the top 10, adding an extra 50k viewers, all other nights dont even make the top 10 meaning the 1 Hour later airing got less than 10k viewers.

Just take a close look at the final night, that was HALLOWEEN night!! And it got the lowest amount of views. And to put it in perspective Masterchef Australia, got more viewers than Celebrity Haunted Hotel on every night it aired in the 7pm or 8pm slot.

Speaking to my contact at UKTV I asked what the producers of the show had said behind closed doors, regarding their hopes for the show, its future and those involved, they expected that the show would grow in viewers each night, that was the hope, but they actually LOST viewers from episode to episode!

Regarding the main celeb hosts, no surprises there, you always know what you are getting with someone like Christine Lampard, so the Producers were happy with her, but what about the UK Haunted crew members, did any of them impress the producers? Well only Emily Exley and Alex Duggan made a good impression, and UKTV might be interested in using them again, but for the rest, here is what I was told.

Miki York, was too wooden and not a natural in front of the camera.
Jolene Lockwood, an ego out of control, with tickets on herself, they really did not like her.
Barri Ghai, he made such a small impact that people kept forgetting his name, and often when mentioned to staff, they would reply with "who?" The funny thing is he could be brought back on to TV not because they like him, but purely by accident when looking for someone who works in the field, and his name comes up.
Alex Gibbs (The fake medium), they referred to her as the "TOWIE wannabe", so that is the impression they have of her.

So there you have it.
Celebrity Haunted Hotel was a complete disaster from start to finish. Terrible ratings suggest it wont be brought back any time soon. Although UKHaunted don't care, since they have put their prices up for "Ghost Hunts" and proudly boast the "as seen on TV" banner on their advertisements, but the truth is, they got their big chance to replace Most Haunted, and failed miserably.

So the question remains, will Most Haunted be given another chance to do a Live show? The regular show is incredibly cheap for UKTV to purchase, roughly £5000 per episode! Yep that is all UKTV have to pay for it and yes it costs MORE Than that for Antix to make too!

How about they commission a "Skeptics Do Halloween Live" for next year. here is my pitch, we get a bunch of the top UK skeptics, and try to scare them. Could be fun!