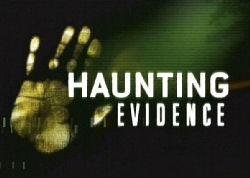 When it comes to paranormal reality programming, American television leaves haunted castles and séance parlor tricks to the British, and turn to psychic solvers of crimes (the more violent, the better), as evidenced by the rash of reality shows featuring psychics-turned-detectives currently airing on U.S. cable channels: “Psychic Investigators” on the W Network, “Sensing Murder” on The Discovery Channel, “Psychic Detectives” and “Haunting Evidence” on Court TV.

“Haunting Evidence” borrows many tricks from Hollywood, including a dramatically-lit title sequence featuring a trio of investigators striking poses, and dramatic re-creations of the crimes the team is investigating. The team members are Carla Baron, a psychic profiler, John J. Oliver, a medium, and Patrick Burns, a paranormal investigator.

In the first episode, “Mystery on the Appalachian Trail”, the trio travels to Shenandoah National Park to attempt to gather new evidence in the cold-case double homicide of two women who were murdered on a camping trip. First, though, we are shown Burns being guided around the crime scenes by a police representative, while the case is recapped for the viewers. Next we see Burns arriving with Baron and Oliver, who, we are informed by a narrator, “have never been to the Park and know nothing about the case.” (Somehow I would have preferred more than just the program’s word on this.)

The trio splits up, with Burns and Baron heading off to discover which trail the victims had taken. Baron manages with remarkably little effort to choose the trail that soon leads Burns to the (snow-hidden) marker he had been previously shown by his guide, marking the campsite of the victims, Laura Winnans and Julie Williams.

Rejoining Oliver, the two psychics begin to share their impressions of the victims and their attacker. The image of Bible pages turning suggests the killer was a religious fanatic, and this was a hate crime. Oliver correctly “hits” on two details he was not told about the case: that the women had a Golden Retriever dog with them, and that one victim was bound with duct tape. (Okay, now wait a second. These are not new clues, given that the police knew them, and so does the audience, thanks to the re-creation scenes during the recap. So why mention them? Just to prove Oliver’s abilities? Couldn’t they have been lucky guesses, based on the number of people who take their dogs camping with them, and the popularity of duct tape among rapist-murderers?) Baron, not to be outdone, “hits” on the fact that Julie was found near water (a small stream).

Burns sets up four video-cameras at the former campsite of the victims and retreats back to the crew’s staging area at the road, leaving Baron and Oliver alone to try contacting the victims’ spirits. At one point, Burns, watching the monitors, notes a light anomaly streaking behind Baron as she is speaking to one of the victims. He interrupts Baron, who seems more irritated than alarmed, and asks the program’s cameraman if his light meter is on. Receiving a negative reply, Burns shrugs and says, well, he doesn’t know what that was, but it was weird. (Uh, right, thanks, Patrick).

The rest of the episode alternates between the psychics’ impressions and re-creations of the unknown man stalking Julie after having already murdered Laura. There is a summary of the “new information” the pair have offered, but strangely, no agreement between them as to the killer’s identity. Baron believes it was a man who was one of the police’s prime suspects, but who could not be tied to the crime by forensic evidence. Oliver believes it was someone else, perhaps questioned by the police, but not really one of the major suspects. (A name, guys, that’s what they’re really after here, you know.)

“Hidden Truth”, the fourth episode, involved the team being called in by the family of a young man found lying dead next to his wrecked car. He was posed, as if someone had been at the scene, and indeed, the medical examiner had already revised his initial cause of death from “accidental” to “undetermined” before the team arrived to tackle the case.

Baron visits the young man’s home, while Oliver (dressed dramatically in all black, this time, and wearing sunglasses most of the time), is lucky enough to be able to check out the remains of the victim’s car. The two piece together a theory that the victim was frightened of someone, had been chased by them, and ultimately beaten to death. There are fewer “hits” this time, possibly because of less forensic evidence, but the narrator continues to assure us that there’s no possible way either psychic could know what they’re telling us. (Well, since they’re mostly talking about emotions and feelings, that is probably true.) Burns’s contribution to the investigation is the observation that it’s odd the dogs across the road from the crew’s shoot did not begin barking until Baron was addressing the victim’s spirit. (I’d like to see Jason from “Ghost Hunters” give this guy one of his famous glares for being such a gullible “paranormal investigator”.)

If psychic detective shows thrill you, give this flashy entry a try, but really, folks, don’t believe everything you see on TV. And USA’s “Psych” about a guy with a photographic memory faking being a psychic detective is a much better use of an hour.