Never buy a pregnancy prediction from ‘Readings by Gail’, ‘Candles and Cauldrons’ or anyone else 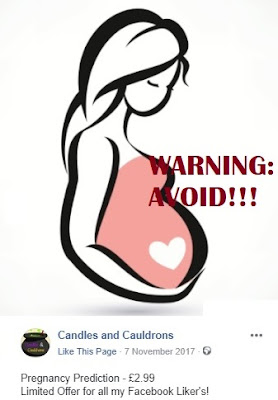 The following article was sent to me, the author wishes to remain anonymous due in part to the vile abuse we received after the previous article, as such you can direct all your abuse to me on Twitter @TheBadPsych

Back in September 2015, BadPsychics published an article entitled ‘A Warning About Gail Cuffe aka Psychic123UKReadings’, which you can read here.

Little did we expect the response that it would unleash. It eventually resulted in Ms Cuffe changing the name of her Facebook page from ‘Psychic123UKReadings’ to ‘Readings by Gail’. We strongly suspect that this was so the article would not be linked to her if anyone Googled the name of her business.

Furthermore, we were inundated with a flood of messages from angry former customers. They all had remarkably similar stories to tell, which usually fell into the following pattern:

Never receives the reading from Ms Cuffe, or

Receives the reading, but compares it to readings that his/her friends have bought – and discovers that they are identical, word for word.


With regard to point 4, even we were taken aback by the extent of Ms Cuffe’s abuse. She isn’t merely unpleasant to customers. She actually attacks them with the most foul-mouthed language imaginable, which have occasionally included threats.

In fact, to illustrate this, we’d like to share a few screenshots, with kind permission from her former customers.

The first few images are particularly interesting because they also show a very common technique in action. Psychics and mediums frequently claim that they are forced by law to put up the "For entertainment purposes only" disclaimer. This is a lie - as Jon Donnis (who runs this site) has explained many times. There is NO law preventing someone from claiming that they are a genuine psychic/medium if they want to. The real reason that psychics use this disclaimer is to try to avoid giving refunds when the customers attempt to get their money back.

You can click on the screenshots if you wish to enlarge them.

In the first one, we can see Ms Cuffe using her disclaimer as an excuse: 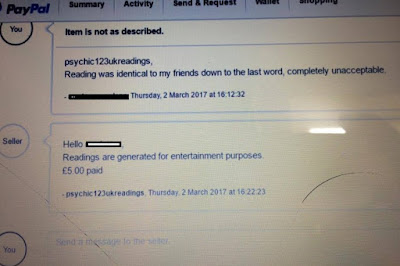 In the second, she gets very confrontational by e-mail – again by referring to the disclaimer:

In the third, she goes ballistic at a customer who tried to get a refund via PayPal. The customer had made an administrative error online and somehow, a claim for £28 was accidentally submitted instead of £3.99. At any rate, the customer did not expect the abuse that Ms Cuffe then gave her:

But it doesn’t end there. In screenshot 4, Ms Cuffe hurls insults at a customer who misunderstood an offer that she posted on her Facebook page: 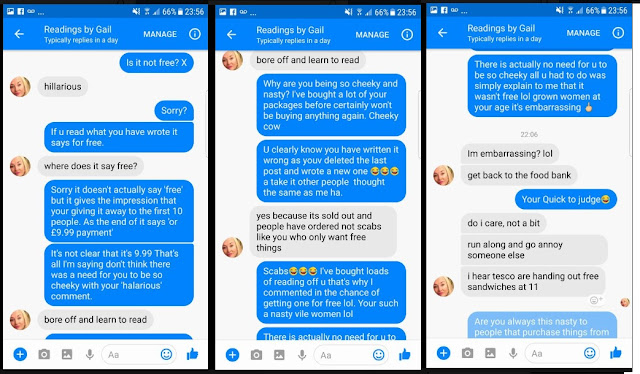 And finally, in screenshot 5, she issued a very sinister, aggressive threat towards someone who confronted her over her behaviour: 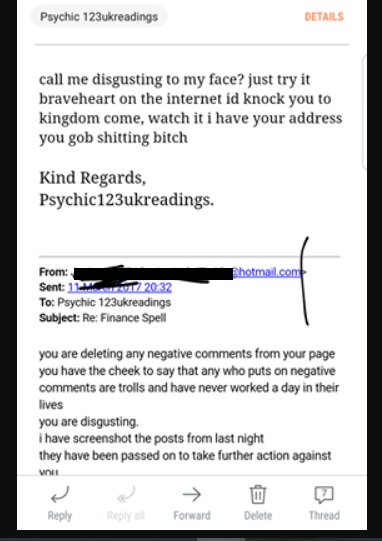 Sadly, despite the multiple complaints, Ms Cuffe has continued to ply her trade as a self-proclaimed psychic and medium. And incidentally, she isn’t the only person in her family to have got in on the act. Her daughter, Hayley Cuffe runs a Facebook page called ‘Candles and Cauldrons’ – which specialises in selling tat like candles and ornamental stones, plus magic spells to bring the customers good luck, wealth, love, weight loss, etc.

Clearly, the apple doesn’t fall far from the tree. One of our eagle-eyed readers spotted something very strange about the testimonials that Hayley Cuffe posts from supposedly satisfied customers who have allegedly had a windfall after buying a magic ‘finance spell’ from her.

For instance, on 18 October 2016, this post appeared on the Candles and Cauldrons page: 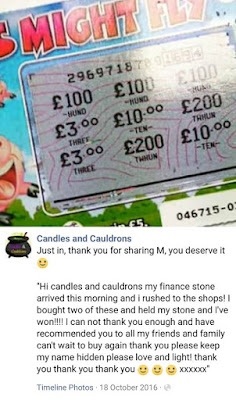 “Just in?” Really? Well, that’s odd – because almost a year before that, on 9 November 2015, Hayley Cuffe posted this: Note how the testimonials are almost identical – except for the initials of the otherwise-anonymous ‘satisfied customers’.

Further investigation into this photo also uncovered something intriguing. Because it turns out that the image was originally uploaded on 18 May 2015, to an Instagram account called ‘scratchcard.winners’: And you can view it here.

Isn’t it weird how a random Instagram account could have access to this scratchcard six months before a customer won £100 with it? And how a second person also managed to win £100 with it a year later? And then how both customers sent near-identical messages of thanks to Hayley Cuffe?

Now, for some readers, complaints about the Cuffe ladies might be old news. However, we decided to write this follow-up post due to the fact that some of the recent messages we have received involve very disturbing stories – centred around pregnancy predictions, which both ‘Readings by Gail’ and ‘Candles and Cauldrons’ offer. 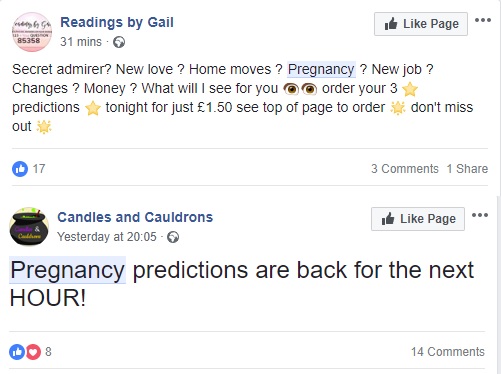 This issue was briefly touched on in the previous article. But it needs to be spelled out clearly here why you should NEVER EVER purchase a pregnancy reading – be that from Gail Cuffe, Hayley Cuffe or anyone else!

First of all, let me draw your attention to the following table, taken from this article in the Huffington Post: 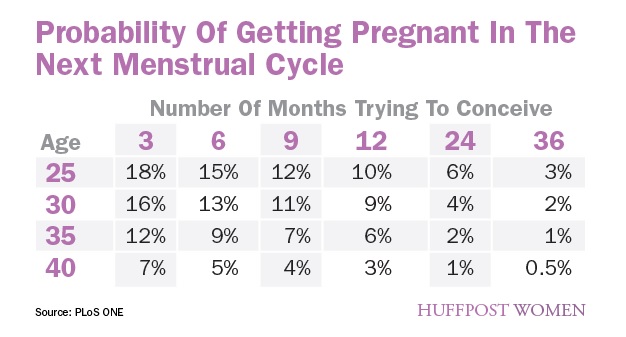 Note that the odds of a woman getting pregnant are initially pretty good. But they decline dramatically after the age of 35. This means that women only have a limited window of opportunity in which to have children and it is vitally important that they do not waste time.

Now, take a look at this post which Gail Cuffe made in September 2017:

As you can see, she actually claims that one of the women will fall pregnant over two-and-a-half years later. It is incredibly dangerous to wait that long – especially if you happen to be in you mid-30s or older.

Let us not forget this message posted by a devastated former customer called Sheena, who was around 40 when she made the mistake of buying a pregnancy reading. 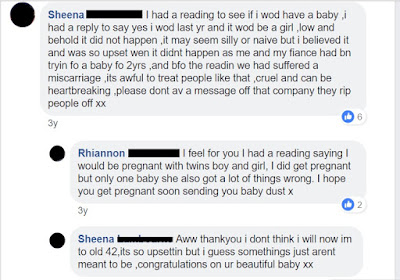 It also turns out that Sheena was not the only person to have been hurt by Gail Cuffe’s inaccurate pregnancy predictions. Another customer by the name of Charlotte bought a pregnancy prediction and was told she would conceive in April or May. Instead, Charlotte’s husband died in April that year. Charlotte then contacted Gail to say how upset she was – but never got a response:

In addition, I came across this post on the Baby Center website about a woman who had become completely addicted to pregnancy readings. Not only did she keep on spending money on Gail’s inaccurate predictions, but also splashed out on baby accessories, believing that she would soon conceive. 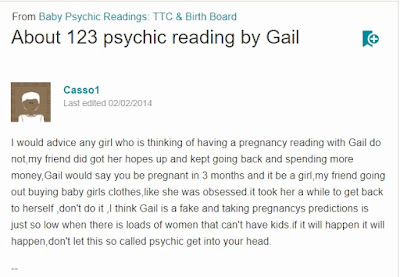 Alas, when women want to have children, it can often escalate into desperation. And it is shockingly common for them to develop a real addiction to purchasing pregnancy readings – because they just want someone to give them hope.

Now, in the interests of fairness, we must point out that Gail Cuffe and her daughter are not the only psychics to have allegedly taken advantage of this vulnerability. And on that note, I’d like to end with a cautionary tale, started by a woman who became obsessed with buying pregnancy readings.

It’s an extremely long forum thread, so to make things simpler, I have pulled out a few key posts for you. In the first screenshot, the writer explains that she has bought pregnancy readings from Gail Cuffe (psychic123) and Suzy Rayne (who runs the ‘Psychic Baby Readings’ site).

A few days after that, she decided to purchase a third prediction – this time from Mary Akinson who ran a (now defunct) website called ‘Destiny Leafs’.

About a week afterwards, she finally got the reading from Mary and was a bit nonplussed that it didn’t tie up with what Gail and Suzy had predicted:

But then, to top it off, she then ordered another baby prediction, this time from someone called Debbie who ran a site called ‘Panrosa readings’ – which has also since shut down.

This was the reading she got from Panrosa – which she vowed would be the last one that she would purchase, as things were now getting a little expensive:

Nonetheless, she did inspire several other women on the forum to purchase pregnancy predictions from multiple psychics. The next few weeks were spent chatting amongst each other and waiting to see whether the predictions would come true. And slowly but surely, a couple of them started to become disillusioned with what the psychics were saying. This post, in particular, caught my eye:

Followed by this one, about the infamous Ms Cuffe:

In fact, of all the women who received psychic readings, predicting that they would get pregnant in August – only two of them actually did. Which is statistically what you would expect from women who actively trying to conceive. Although the thread had started off in a light-hearted manner, many of the women ended up getting very upset, which you can read in detail on this page.

As for the original creator of the thread, she made one final post, almost a year later and admitted that all the readings had been a complete waste of time and money.

That just about says it all. An expensive lesson which was learned the hard way. It only remains for me to add that if you are having problems getting pregnant, then the person you should consult is a doctor/gynaecologist. And not – under any circumstances – a psychic!