TV REVIEW Most Haunted Episode 4/10 (The Galleries Of Justice)

"There's Something Nasty Here, That's The Sickest Smell I've Ever Smelled in my Whole Life"

With that opening line from Yvette and I believe Kim Crump (Superstar Mel Crump's sister), we have a perfect definition of everything that is Most Haunted!

Before I carry on with my spoilers and review of Episode 4, can I just thank everyone for your kind comments regarding my reviews, and your understanding of the pain I go through to sit and do this for you.

Anyway on to the show, we start off with a history lesson as Yvette enters the court room and sits herself down on the Judges chair.

Yvette tells us of...
"Lots of moans, Groans, and whines of desperation"
and that's just the Most Haunted crew having to listen to Yvette blather on! 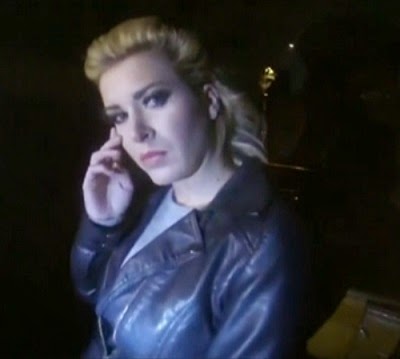 Yvette catches up with Fred and reveals that she is used to finding him lurking in dark corners, Mr Excitement then describes what happens, as a brush handle drops down from the ceiling area, of course at no point do they point the camera up, or around the area to see where it came from, and strangely the thing is quickly ignored and they carry on! I am guessing they were not happy with Stuart throwing stuff so early on.

Firstly let me announce that Mel Crump is NOT in this episode, I hope she hasn't done a runner already, although it is announced that her sister Kim is gonna take her place. I hope that isn't the same Kim Crump that is a spiritual healer? Hmmmmm. Although regardless of that much like her sister Mel, Kim is also a bit of a hotty!

Anyway the investigation starts, Yvette genuinely says the following
"Can you make a noise with your voice please" 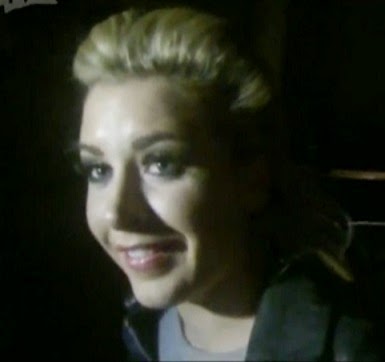 Anyway we get a bit more of Kim, which is a huge relief since Mel Crump is not on the show, Hey UKTV if you reading this (and I know you are) how about you commission a show for REALLY called "Mel & Kim Investigate" damn I would watch that! It could just be them wandering about doing well whatever they want!

Anyway back to the nonsense, and they can hear some knocking, sounds a bit like Karl tapping his shoe to me, its all very predictable, at this point Kim has to cover her mouth cause she is laughing so hard at the silliness, Yvette tries to cover it up by claiming its cause she is nervous!

After hearing a bang "right next to her" Yvette puts her old acting training into good use as she screams and runs away.

Yvette declares that in all her time doing Most Haunted she has never had anything like that happen to her before, and be so close. She states that someone is following them, strangely not seen Stuart yet!

They head down into the cellars, and another bang, Yvette screams, and now we see Stuart for the first time, as usual nothing is caught on camera, we have a lot of people down there, and Stuart and Karl are often behind the cameras and off screen whenever anything happens! We know as a proven fact that Karl and Stuart have faked things before, so how can anyone ever trust them to be honest.

Here is a picture of Karl for no reason at all! 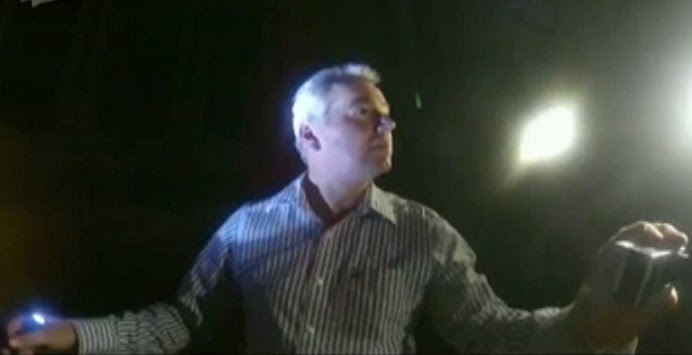 Karl describes how the bang must have come from someone behind him and Stuart but that there was no one there!! Quick call the Nobel committee and get the Prize ready for Karl! 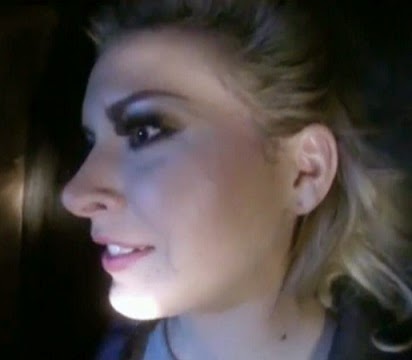 Kim is getting a surprising amount of air time in this episode, way more than Mel got! Methinks that something suspicious is going on here!

Has Mel been replaced by her sister? Was Yvette really that jealous of Mel Crump's popularity? Only time will tell! Although neither Kim nor Mel have yet claimed to have had their bum felt like Cath Howe used to have done to her regularly! Of course there is no possible way that was Karl or Stuart and must have been the ghosts!

Kim reveals that she is an 8 out of 10 on a scale of scared-ness. That's pretty high! 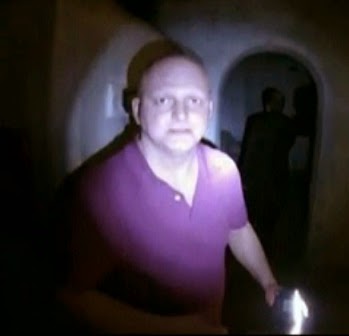 Stuart reveals he is out of breath and knackered, not sure the point of that, but he feels the need to tell us that, must be the ghosts, of course as soon as they down there things are getting thrown, ALWAYS off camera, this time it is a candle! makes a change from pine cones and rolls of tape.

More things being thrown and bangs and so on, as Karl, Stuart and Fred "investigate" and remember that Brush from earlier, it magically gets thrown near them! All off camera.

Kim is doing a great job on the team, and looking great doing it, Cameraman Chris keeps making noises, but at least he admits he is doing it every time, I don't think he is in on the gimmicks to be fair.

In a Most Haunted first it appears that Fred throws a cheese grater at Karl! It is not clear, and might get edited out of the final airing, but looks to me like Fred had the grater hidden in his sleeve, and when he turns round he very carefully throws it, I might be wrong on this one, and I would rather see on a 50" HD TV, but looked very suspicious to me and happens so quick its hard to tell.

Next up a bottle is thrown, a gate is slammed shut, and another candle is thrown, it is pretty blatant Karl, Stuart and Fred are behind most of this, I can imagine a certain section of viewers watching this at home thinking it's all real.

If you like high jinx then this is the best episode of the series yet.

Quick update of Kim, and she is looking scared. I hope when Mel Crump watches this she doesn't get too jealous of all the attention her sister has had.

Karl says loudly to the ghosts
"Can't you do it so we can see you do it?"

And he actually says that with a straight face too!

Stuart then says
"We mean you no disrespect"

to which Karl follows up with
"Yeah, but go fuck yourselves"

It's that kind of lovely language that really attracts the kids to this show!

The battery on Yvette's camera has run out despite being fully charged! Of course cant possibly be a rubbish battery, and instead must be the spirits draining the energy!

The investigation continues and Fred's favourite toy the cheese grater gets thrown again!

It is at this point that Yvette drops the smelliest most disgusting fart in the history of the show, at first she claims she cant smell it but then admits it. With Yvette and Kim now dry heaving, and trying not to physically vomit, Kim reveals it smells like rotting flesh, poor Karl having to live with Yvette if she does farts like that, no wonder he employs Kim and Mel as eye candy on the show!

If you remember the old Most Farted videos from years ago, I am sure someone could have a lot of fun with this footage and add in some great sound effects!

Yvette is now holding her nose and claiming the smell is too strong, almost like she is over egging it now! Everyone knows its you Yvette! Poor Kim! 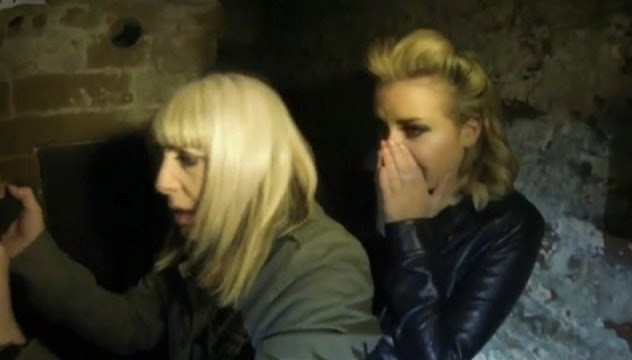 At this point in the episode Kim is genuinely quite distressed, the ghosts don't bother her but Yvette's stinking arse has almost killed her!

They then enter a lift and of course the smell follows them! We get a bit of lift nonsense, as Kim declares she wants to get out, and the lift is now apparently stuck between floors. Yvette seems to enjoy forcing Chris, Karl and Kim to stay in the lift and breathe in her disgusting farts. She really needs to see a doctor.

I wonder if Yvette blames the ghosts for when she farts at home, or in the supermarket? The whole farting thing goes on a bit long to be honest, I am guessing they ran out of use-able footage so had to revert to this nonsense. I'm serious they have this whole smelly fart rubbish go on for a good 8 minutes of the episode.

Kim does not look at all impressed, and I think she's realising what she has gotten herself into.

After they finally get out Yvette proudly states
"That was impressive stuff, who could've imagined that"

We finish off with Mr Personality Dr John Callow reading off a teleprompter, I am sure he said something vaguely interesting but I fell asleep listening to him.

And that's the end of the episode and an hour of my life I will never get back.

So what did we learn from this episode of Most Haunted, we learnt that Mel Crump has an equally fit sister called Kim Crump, and that Yvette Fielding has rancid farts. Well done UKTV and Really for paying for this! Now if we could just cut out all the Yvette and Karl nonsense and just have Mel and Kim Crump we might just have a show on our hands!

The legendary ghost hunters continue in Nottingham and a place where people could be jailed, sentenced and executed without even leaving the building, no wonder it is said to be one of the most haunted places in Great Britain. The team are tested as a supposedly mysterious poltergeist takes a dislike to Karl and Stuart, while Yvette is followed by a foul smelling spirit and experiences her most compelling evidence yet.
Posted by JD at 14:03 No comments: