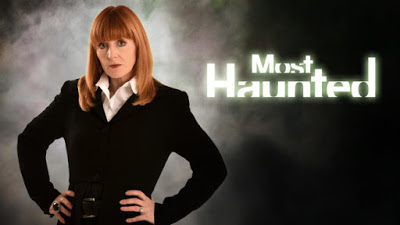 I am back, after the huge outrage from the snowflakes, regarding last week's review. I was accused of "fat shaming" Yvette Fielding. And why I hear you ask? Because I used an old saying "A moment on the lips, a lifetime on the hips", to describe Yvette Fielding as it appeared she was looking curvier than usual.

The fact I complimented Yvette throughout the previous review, goes to prove that people just look for offence where there is none.

So to Yvette Fielding, a woman I know reads these reviews, I am sure you took my comments in the light hearted spirit they were meant. I personally think you look great, and the curves suit you. Now why you are with that old wrinkly scrotum of a man in Karl Beattie I will never know.

And with the word scrotum already used, that can only mean one thing, BLURB!

"Spook-searching with Yvette and co!. Yvette and the team are pushed to the limits on a memorable visit to Llanfylin workhouse to discover why anyone would stay after they had died."

Everyone thoroughly enjoyed my predictions last time, so I thought I would do them again. Also I promise you these predictions are legit, I don't come back and edit them, or add to them, it is what I predict will happen.

1. Something will be thrown OFF CAMERA.
2. There will be a carefully choreographed pre-planned, scripted argument.
3. Fred will say something strange.
4. Yvette and Glen will hold hands in a suspicious manner.
5. Yvette will tell people to ssshhhh.
6. Fred will blame something on a demon.

This week we are at an old Workhouse, they seem to do a lot of ghost hunts at these old work houses. 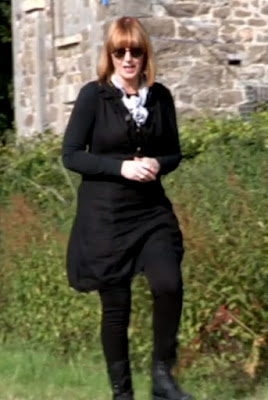 What on earth is Yvette wearing here. Last week she had on a nice pair of tight trousers that showed off her lovely figure, this week she has some kind of sack wrapped around her waste? How bizarre.

Message to Yvette, you have a lovely womanly figure, don't let anyone tell you to cover up. Be proud.

(Is this Sack Shaming? Snowflakes feel free to leave me abuse in the comments section, I wont approve it, but I do read it all.) 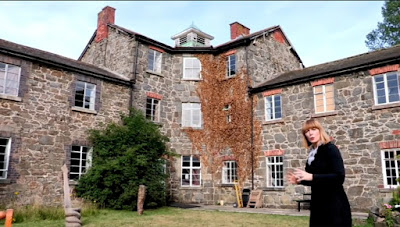 What a lovely looking place, someone needs to buy it and turn it into a hotel or a pub.

Yvette and Glen are talking about the ghost of "The Master", can I say here and now, I am alive and well, and my ghost is not haunting the Llanfylin Workhouse.

"I have every reason to believe everything you are telling me" - Glen to Yvette.

I am guessing that Glen has never watched Most Haunted in his life.

I wonder if they are a bit short on footage for this episode, as there is a lot of talking between Yvette and Glen at the start about the place. Keep this for your podcast guys, no one really cares to watch Most Haunted to hear you talk about what people may or may not have done when they were alive. We are here to see you throw stones, fall over and generally make fools of yourself.

Blimey, just fast forward through the first 13 minutes, this is monotonous. 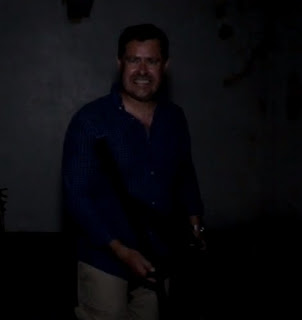 No idea who this guy is, but he is having fun it seems.

As they finish the first very long scene, they turn the lights off and suddenly something is thrown OFF CAMERA. 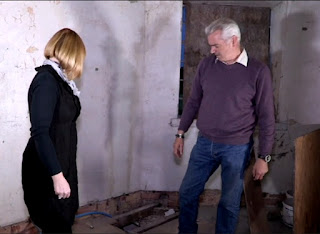 Yvette is convinced it was a light bulb, but since the floor is covered with crap and debris, it could literally be anything, and since it happened OFF CAMERA the whole thing is evidentially worthless.

"When we are leaving a room and stuff happens, that should be called something" - Yvette Fielding.

I have a suggestion. How about we call it "Karl throws something OFF CAMERA". 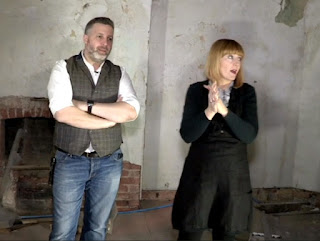 Glen is seriously considering his life choices here. He knows it's all bull, but he has to collect his paycheck and he is signed up to do this stupid podcast with Yvette, so he just gotta play the game. 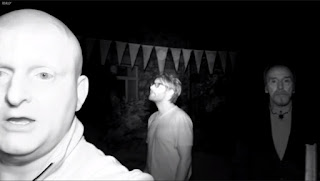 Stuart is back I see, so expect lots of things to be thrown this week. Also gives Karl's throwing arm a rest, he has tennis elbow you know.

Yvette is now calling it "The Come Back Phenomena" for when things are thrown as they try to leave a room.

Karl is sat on his own.

Fred is with Stuart, and already Fred is feeling "strange", doing his best Derek Acorah impression.

22 Minutes in and nothing has happened other than a few noises OFF CAMERA. Seriously just fast forward, this is ridiculously bad. Come on Stuart do something.

And as I say that there is a noise in Stuart's group. Of course it is OFF CAMERA. And there are no static cameras about, just Stuart and his handheld camera. 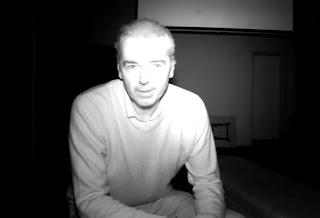 Karl is sat on his own, he has placed the camera down and is just filming himself as he talks. I don't understand the point of this in respect to a ghost investigation.

Fred walks into Stuart and Stuart is convinced something was thrown at him, despite it clearly just being Fred walking into him while he holds his book.

As they examine the floor, there is a noise, and magically a chair has been thrown on the stairs...... OFF CAMERA. 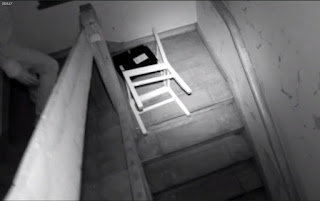 As Darren goes to investigate, he ends up in what looks like the private area of the building where someone lives, and the back door is wide open. Therefore instantly even if you believe this is all real and not set up, there is a chance that someone was watching them, chucked the chair and then ran off. You see if there was static cameras, they would have caught this, but of course that is never the case. So instead we are left with these blatantly set up, ridiculous incidents that just make a mockery of the whole thing.

So ask yourself what is most likely, a ghost threw the chair, or someone else on the crew did? Every time something happens OFF CAMERA, the most likely explanation is always that it was a member of the crew who did it.

Karl is still sat looking at the camera, and strangely nothing is happening.

Stuart and Fred are trying to understand who threw the chair, Fred said it must've been a demon. Yes that makes the most sense. An evil demon decided to scare them, by throwing a chair OFF CAMERA.

Another chair as been thrown OFF CAMERA near to Stuart, Fred and Darren.
More running about and gnashing of teeth, and Stuart trying to prove that there is no one else around.

Karl has finally got off his skinny arse and is investigating, I am guessing now he has one hand free something might happen. 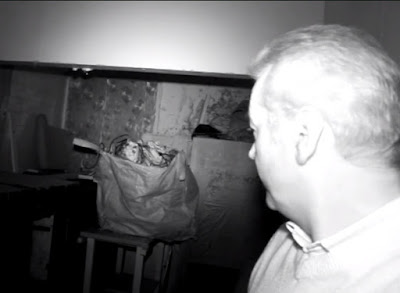 Back to Stuart and just as he is about to go back downstairs, something is thrown over his head and into view. I would guess from about where Fred is standing, so OFF CAMERA.

Stuart and Fred are arguing, I am guessing that people caught on to the fake Karl and Yvette arguments so instead they decided to flip the script and have Stuart and Fred argue instead. Hilariously the argument is based on Stuart wanting to dash about looking for someone real who is throwing the chairs, and Fred saying it is a demon and they need to stay in one place.

They finally show the replay, and it is clear that the thing that is thrown is an old light bulb and it comes from over Stuart's head, exactly where Fred is standing.

I wonder if Stuart did not know Fred was going to do this, so didn't actually see the thing being thrown and land, so wasn't sure where he had to look.

Stuart and Fred are still arguing, it is so obviously fake. Stuart is overacting here way more than usual. 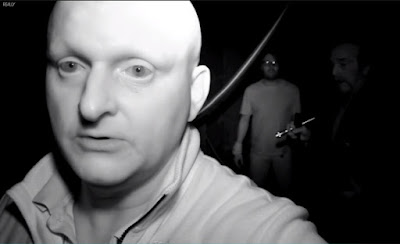 "Something bad is about to happen" - Stuart. 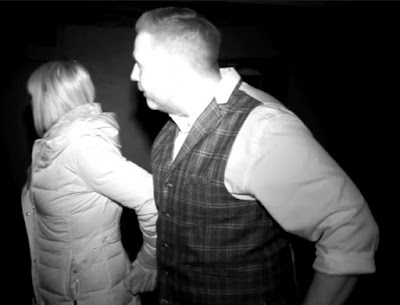 Been ages since we have been with Yvette and Glen, and Yvette out of nowhere grabs Glen's hand, and thrusts it towards her behind. Glen cant hide his glee here.

Yvette holds onto Glen's hand for way too long here.

As Fred, Stuart and Darren return downstairs, there is a laugh out loud moment as Fred suddenly gains Stuart's attention, and both couches have been carefully turned over...... OFF CAMERA. Not sure if someone tipping a couch on its side is considered to be bad. 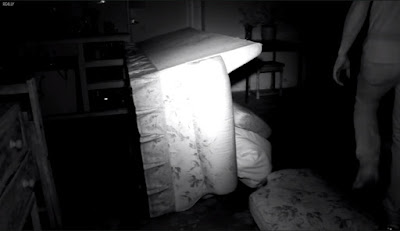 Yvette is still holding Glen's hand, and he has never looked more smug in his life. 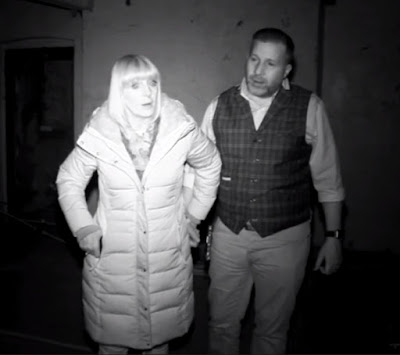 I can tell you now, that Glen wont be washing that hand for a while.

Yvette hears a noise, and finally lets go of his hand. There was a faint sound, but it could literally be anything, including an owl, or kids out at night on the road, or anything. Since there is no controls in place, the most likely explanation is that it is someone real nearby.

Since this is a two part episode, it all ends rather unexpectedly, we get some brief preview highlights of the next episode, and the credits roll.

This was a poor episode, nothing even vaguely interesting happens for the first 25 minutes, so you can just fast forward through that. The rest of the episode is the usual - Noise OFF CAMERA - Investigate - Find Something - Rinse - Repeat.

With last weeks episode seemingly being the start of an improvement, this weeks episode has dragged the show right back to its normal level of nonsense and mediocrity.

Just send any voucher to webmaster@badpsychics.co.uk