Just a quick article, a full review will be up hopefully later today, as I have not watched the show in full yet.

As Most Haunted Halloween started, I thought I would watch the first 10 minutes just to see how they were presenting the episode, whether they would pretend it was live, or have any kind of MHL type format. For the record they are not allowed as they do not own the rights to the original Most Haunted Live format, Sky TV still own those rights.

Anyway the show starts and although very rough, it would be the normal format of the show, but they were trying to present it as if it was live, although they never said that, I believe that it was promoted "as live" in other words it was recorded in one go previously, and aired without edits on the show. But as we will find out that was a lie. A bare faced cheeky bummed lie.

In the first few minutes a bottle was thrown, OFF CAMERA, from Stuart's direction, Glen quickly announced that this was definitely paranormal. Remember he is supposedly the skeptic on the show. At this point I turned the show off, and decided to look for something else to watch on catch up, as I turned that on, I noticed that the Most Haunted Halloween episode was there to watch in full! Before it has even finished airing on REALLY.

So I thought I would have a quick fast forward through the whole thing to see if anything good happened later on. I ended up near the end at the bed flipping stunt.

Here were my comments on Twitter at the time. 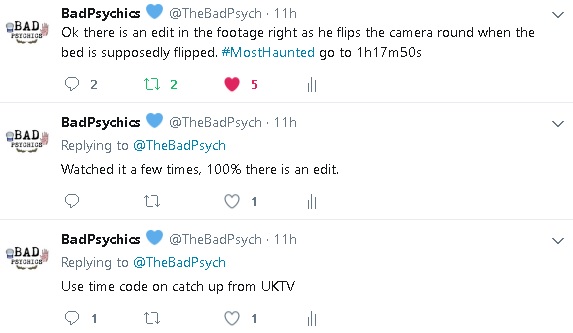 Without hardly any analysing, I had spotted an edit which gave away the whole game. And boy did I make sure I told everyone, lots of tweeting people, warning them what to look out for.

Luckily for me, REALLY have uploaded the clip to their twitter account, so first watch it below, or if you prefer you can go to UKTV catch up, and find the scene yourself using the time code of 1 hour, 17 Minutes, 50 Seconds.

You NEED to watch this clip to the end. #MostHauntedHalloween #Halloweek pic.twitter.com/xEGhueiwBL
— Really Channel (@reallychannel) October 31, 2017

Did you spot the edit?
Ok I will admit to the untrained eye who is not primed to look for such things, it is hard to spot, so I have cut the exact moment out and pasted it below.
As Karl is filming away from the bed flipping room, there is a noise, then there is a slight digitally added zoom on the shot, the camera turns and then a slight digital zoom out. The edit is there, the zoom is to fix the fact the shot wasn't lined up correctly. Karl saying "what was that" is added in post production too.


By turning the camera quickly and having the edit there, it is in theory much harder to spot due to motion blur, but unfortunately he never lined up the second part properly so needed to use a digital zoom to match up the two pieces of footage.

In the past any camera edits have been done after Karl's camera has been placed on a surface, or is on a tripod, this makes the edit much easier as its just a matter of pressing pause on the record, doing your shennanigans, then resuming the recording, well after we exposed Most Haunted of doing this with the Ghost Stuart on the stairs stunt, and then the sideboard door closing stunt whereby Karl forgot there was a clock in the scene which totally gave it away that there was an edit, clearly they thought they needed to be smarter, and do the edit while the camera was moving. Well sorry guys, we got you again!

I am sure there is more to expose in the two hour special, and when I get chance I will do the review, but for now, it's good bye from me.