100% proof of ghosts, spirits, poltergeist. Yes all caught on camera. 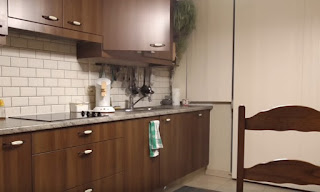 We finally have proof of ghostly activity!
Yes we have a chair moving in a kitchen all by itself, and a cabinet door opening! Surely this is the proof we have all been waiting for!

The only problem is, that it is faked. I was forwarded the link to a Youtubechannel called "Duck of Truth"
And what i saw was a video that was the same as so many so called poltergeist videos, usually filmed in someones kitchen. But the best part is, that it is admittedly faked, and the author even shows how he did it. So next time you see one of these "100% proof of ghosts" type videos out there, just remember two simple things, 1. There are no such things as ghosts. 2. It is so easily faked.

Duck of Truth
"This video was made to show how easy it is to fake a ghost sighting. There are many videos on YouTube like this one and unfortunately people believe that they are real when they are actually fake.
All you need is some fancy video editing techniques, similar to the ones I'm showing but less broken.
Let's just say I wouldn't pass an exam with this video.
Someone requested I make a proper video showing off these techniques as I keep claiming they're easy to fake. So I did."

Duck of truth has soon good videos on his channel. He's debunk a few of the popular YouTube channels that claim to be haunted and have poltergeist activity in their homes. He's pointed out flaws and editing in Michael D Magee, he claims to be the most haunted man in England and has over 70,000 subscribers and Duck of truth also debunked Mellowb1rd another popular youtubers who claims to have really bad poltergeist activity. There is one video of his that has things being thrown around the kitchen and that's the video Duck of truth covers. It's a good watch and defintely worth checking out. ��