The Numbers Preventing Psychics Being Real 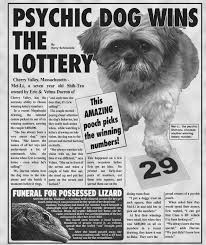 I wanted to have a brief look at why we never see the headline "Psychic Predicts Lottery Win And Wins £100,000,000 The Following Day", now I am sure there will be a lottery winner somewhere in the world who claims they are psychic, purely by statistics this will either have happened or will happen, but one thing I can guarantee has never happened and will never happen, is for a psychic to predict they will win the lottery or some high odds gambling bet, and then win it! This is because no one can predict the future, since the future hasn't happened yet!

Here is a great story with the famous headline Psychic Wins Lottery
The problem with it is that she just happens to work as a psychic, and AFTER winning claimed she "had a feeling" Months earlier! Not quite the amazing story it tries to be is it! If this was considered proof of psychic abilities, than I bet you could ask every Lottery winner ever, and they would nearly all say they "had a feeling", sorry unless you make the prediction BEFOREHAND, I don't accept that.

In fact more convincing was Derren Brown's amazing trick whereby he picked the numbers "live" and then won the lottery! Watch below, and no don't worry Magic Circle, I wont expose how it was done, but for anyone curious there are plenty of debunking videos on Youtube


Don't get me wrong, I can predict the future and know I will be proven right, but I do that using common sense and logic, I am talking about predicting a future event that has very high odds.

So for me to say "I predict a member of the Royal Family will give birth to a baby girl within the next ten years", there is a pretty good chance this will happen, since it is a very big family, and people have babies. However if I was to say "I predict that on February 27th 2019, Prince Charles will become King Charles" that is incredibly unlikely to come true, (if it does people please remind me of this article!), And that is the problem with psychics and future predictions, it all comes down to odds, and realistically speaking, psychics never beat the odds.

I think you get the point.
Psychics convince people they have powers, by predicting things that have very low odds.
So they will tell you the sex of your unborn child. This is literally a 50% chance, or 1 in 2.
They will be right half the time. And the half of the time they are right, their clients will tell the world, "hey Jon the Psychic KNEW my child would be a boy" Where as the one who got it wrong, is soon forgotten.

So ok the lottery is way too hard for a psychic to win, as they would need genuine powers to do so.
Their usual excuse is that their powers don't allow them to make huge amounts of money! But what about smaller amounts of money, afterall they do take payment from people, £50 here, £20 there. It all adds up.

So surely the best place for a psychic would be a casino, at such a place they would be betting to win lower amounts. But what would the odds be in a casino if you do think you are psychic?

Well if you wanted an easy game to win, Blackjack has the best odds, as you are only playing against the dealer. But that is hardly proof of psychic powers is it?

Poker, nope that is no good, as not really a game of odds, but a game of skill.

What about Craps, well you are betting on the roll of a dice, so odds are about 50/50, again not good proof that you are psychic.

Now roulette, this is a game that you could prove yourself on. Lets forget about betting on red or black, as that is nearly 50/50 (don't forget the green 0)

So if you bet on a normal number it is 36 to 1. So how about this, if you were to get this right 3 times in a row, and you claimed your were psychic, I would find it incredible hard to say you weren't.

Now one name I always get thrown at me as proof of someone who could predict the future was our old friend Nostradamus, or Michel as I used to call him. 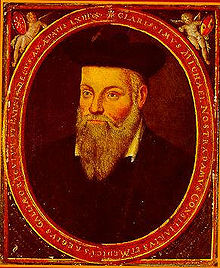 Not sure who he is? Read this from Skeptics Dictionary...

"Michel Nostradamus was a 16th-century French physician and astrologer. His modern followers see him as a prophet. His prophecies have a magical quality for those who study them: They are muddled and obscure before the predicted event, but become crystal clear after the event has occurred." Source: http://skepdic.com/nostrada.html

One of his famous quatrains is below.
The year 1999 seven months
From the sky will come the great King of Terror.
To resuscitate the great king of the Mongols. Before and after Mars reigns by good luck.

So reading that, what do you think he is predicting?
So the year 1999, that's clear, then seven months, so that would be July.
Something happening in the sky, so that could be a plane crash, a meteorite, a huge storm, some kind of natural disaster. Something about a King?

Ok it is vague to say the least.

Many have claimed it predicted the death of John F Kennedy Jr.
On the 16th "John F. Kennedy Jr., his wife Carolyn Bessette Kennedy, and sister-in-law Lauren Bessette are killed in a plane crash off the coast of Martha's Vineyard. The Piper Saratoga aircraft was piloted by Kennedy."

So that is the year and month right, but JFK Jr was not a King, nor a King of Terror, and no link to anything else.

On the 27th Pro Skater Tony Hawk is the first skateboarder to land a "900", he is the King of skateboarding? And a 900 is in the air I guess?

ANA Flight 61 was hijacked in Tokyo, Japan, on the 23rd, but it didn't crash. And Japan is about 3000km from Mongolia. So no connection there.

On the 23rd Crown Prince Mohammed Ben Al-Hassan is crowned King Mohammed VI of Morocco on the death of his father, but his father died of natural causes, so nothing really special there.

So the only thing that comes close is JFK Jr. And that is the problem with predicting the future, and especially when being so vague about it. Be specific and you will be wrong because the odds are simply against you. Be vague, and almost anything can be twisted to fit what you said, which is pretty much how ever prediction made by Nostradamus is treated.

The point is the psychic industry is clearly flawed, flawed to such an extent that it does not work, no psychic will ever predict a win on a high odds gambling bet, and then win. Whether it is the Lottery, a casino or an online casino site such as Lucky Nugget that offers a simulation of a real casino experience. No psychic has ever predicted a major future event and got it right.

Yes there are stories of people who have "drawn the future" but even when these are investigated, it is the odds that end up working in their favour. Draw or paint one picture that shows and event, if that comes true, then that would be impressive, but in every case, we always find out that the "psychic" has in fact drawn or painted hundreds if not thousands of pictures, and then when an event happens, they just try and find one of them that kind of matches what has happened! The more events you draw, the more you lower your odds of eventually being proven right.

So remember folks, you can't predict the future, it hasn't happened yet, you'd be better off spending your money on the roulette table, than predicting the future, as at least in the casino you have an actual chance of winning!