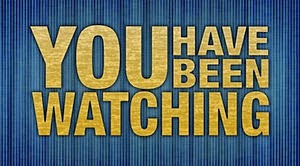 You Have Been Watching is a British comedy panel game presented by Charlie Brooker, produced by Zeppotron for Channel 4 and filmed at BBC Television Centre (pilot and series 2) and Riverside Studios (series 1) in London. It first aired on 7 July 2009, for a weekly eight-episode run.

Each week Brooker is accompanied by a panel of three guests. The focus of the quiz is television - before recording, guest panellists watch selected episodes of various television shows. They may then be asked to suggest hypothetical improvements to the format, critically assess it, or to answer quiz questions on the content.
Posted by JD at 09:19