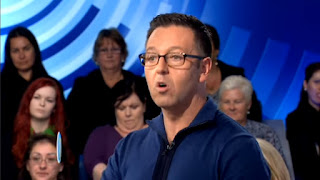 Since I published the analysis of a couple of readings by Harry T whereby I showed step by step exactly how he was doing it, it occurred to me that the name of this site is indeed BadPsychics, that perhaps I should expose a few more psychics, as I had become a tad lazy, and by doing the reviews of Most Haunted, I had become a bit of a whore for ratings. Reviewing Most Haunted gets me easy traffic to the site, but after I checked how many people had read the Harry T article, I realised that in fact more people read that, than the review of MH I had done the day after.

So bizarrely it seems that people are more interested in seeing me expose fake psychics than make fun of a fake ghost hunting TV show.

Well, after speaking to someone via email, who had insisted that John Edward was the real deal, I thought I would revisit this man. A man who has in fact been exposed as a fake many many times over the years.

I was challenged to analyse a reading he had done on an Australian TV show, as this I was told was similar to the reading they had received, and that they could not figure out how he was doing it.

So I summoned my favourite minion to transcribe the reading for me, (Forum member girlseeksghosts), and below is what I found out.

Now for the record because people ask, when I analyse these types of readings I prefer to make it as analytical as possible, I take out any emotion. So right now, as I write this I have not seen the video. I will work only from the transcript.

I do this as it allows me to concentrate purely on what is being said.

Now should I come to a part that I cannot understand how it is done, or I need to know a bit more about the person being read for context, I will then watch the video to see what clues were given away by the audience member, or to better understand why something was said. But usually the words are enough. It allows the purest form of analysis. And I advise anyone who has ever been convinced by a medium, to get the reading transcribed, and read it through.

Much like any magic trick, when you see the routine written down, it is much easier to figure out how it was done. So with regards to a psychic reading, you can see how many questions are asked, how many hits/misses there are and so on.

First you can watch the video yourself if you like. And after you have scroll down to see my analysis.