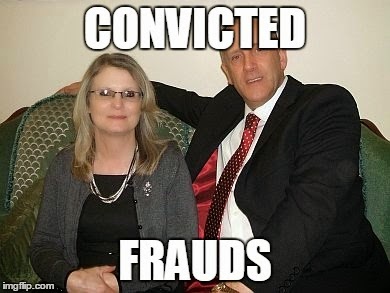 You may recall that back in June 2014 I covered the story of Timothy Abbott and his wife Janette who claimed thousands of pounds in disability, council tax and housing benefit payments, saying they could hardly walk.

Well they got caught out by those lovely people Department of Work and Pensions investigators, as you can see from the video below!

Well his 16 year fraud has cost him his freedom as on the 5th of March 2015 he was jailed for 8 Months, while his wife Janette was handed an eight-month prison sentence, suspended for 18 months.

A proceeds of crime hearing on June 30 will determine how much the couple must pay back as well as their jail sentences.

So justice has been done, sadly their fraudulent mediumship was not what they got caught on, but it is interesting to note that the SNU of the Midlands were still booking them for Church gigs and so on.

Yep thats the Spiritualist National Union booking FRAUDS for gigs knowing full well what they had been up to.

And lets not forget before all of this came out, they were two of the SNU's top Tutors at the Arthur Findlay college

The SNU employed them, yet not a single psychic/medium at the SNU could see they were frauds!
What does that tell you not only about the SNU, but about psychics in general.

Firstly no one saw this coming, and if they did, that means they condoned fraud!

Right now the SNU are doing their best to hush this all up, much like their arrests in the first place, but this is BadPsychics, and we tell the truth.

The funny thing is The SNU, used to have meetings about me, and work out how they could stop me, and close down this site, yet it seems their own Psychics are doing the job for me!

Lets hope that Timothy Abbott ends up in a nice rough Prison, and learns his lesson, because if he starts to "demonstrate" his fake mediumship when he gets out, we will make sure everyone knows he is a convicted fraud, and a criminal.

Well Jon, I have just exposed another fraudulent Psychic called Sue Knock of Ipswich. She is psychotic more like. I was first introduced to her in Gala bingo on Ipswich by a lady called Yvonne Harris who visited with her husband Keith. Yvonne is disabled and in a wheelchair. We would exchange inspirational verse and funny pics on our phones there off fb. She asked me to join her fb page and that of Sue Knock who had given her readings in the past. I had a very bad feeling about Sue Knock from the first time I met her. I told neither, that I have been a private investigator, now 40 years or that I have a genuine "gift" from childhood. Through my life I have been approached by strangers who have told me I have a gift, an aura a out me...my reply would be "I know" or Really! I too would feel a presence off of them...those that were truly a gifted medium or psychic. I have never "sold" my gift for money. Daily crap, excuse the language, and dribble for last three months would be in my fb page from Sue Knock. Eve: I am now having my usual 3 large glasses of red wine, she would post, then 9pm - she is lighting a candle and invites people to post details of those in spirit. Her grammar is appalling.....i think she was drunk. Posts about her book, now going out all day, or going to pictures.

You confused me slightly. Can you post exactly how you exposed her on the forum http://moh2005.proboards.com

Also I am concerned about your claim that you have a genuine gift. Do you mean you think you have a psychic gift?

Do you have any proof of that, or can you provide proof to me?

Excuse me, but I have an issue here, that because someone commits fraud or any crime, does not mean their work or other parts of their life are fruadulent.. Having seen many people genuinely on benefits of many kinds, yet able to still live their lives, do some volunteer and even paid work to their allowed level , and being myself one who has limitations as to working a 9 to 5 job, yet I can still go about daily things such as shopping, house work etc, at my own pace, and yes offering Spiritual knowledge and Mediumship without taxing myself to the point a usual job has previously and would now cripple me for doing any of those ,,,,,,,,, so Yes deal with the issues but one cant also claim that abilities and daily life are fraudulent. Maybe, these people were simply operating to their physical abilities, regaining health or yes outright falsely claiming illness but you can not state that therefore their Mediumship is also Faulse. You ask for proof of psychic gifts yet have you ever see these people work, or does this come down to yet another skeptic not willing to accept all that is possible , just because you dont believe something exists.

Yes I have seen these people work, and they use cold reading, so they are fraudulent mediums.

The point is that if you are prepared to lie and steal in one part of your life (when you really dont need to), then you are a dishonest person, how can you try a dishonest person to be honest to you with regards to their claims of psychic ability?

There people are liars, they are frauds, they are conmen, this is what they do, they steal money. This is who they are, if you too blind to see that, then I feel for you, but then I realise that you claim magic powers too.

So here is my challenge to you Julie, are you the real deal? Or are you a con artist? Are you prepared to back up your claims and prove yourself to me, or will you start listing off the excuses right now as to why you dont need to prove yourself to me.

Fact is you came to MY website to try and defend two frauds, that makes me suspicious of you and what you do, so you have ever reason to want to prove your honesty to me.

If you choose not to, or to run away etc, then that tells me you are scared of being found out, and then that just makes me want to expose you even more.

So before I start an investigation into you, (There is plenty on Google i just checked) How about you do what no other medium is prepared to do, and that is back up your claims!

There is a Norwegian documemtary series from 2012 that has Tim Abbot in an episode and he is wandering around a wealthy area of Oslo in the snow giving his talks and seances. Funny that he could be out there in the cold (and on television) and still be making his fake benefits claims. I've only just heard of him (via NRK TV) and I am pleased and amused that he is most famous in this country for being an outright fraud. I am, however, disappointed that it seems Norway is awash with our trash! https://tv.nrk.no/serie/normal-galskap/DMPF71005711/sesong-1/episode-4

Thanks for that link, never knew he had appeared on Norwegian TV!
He is not famous whatsoever in the UK, other than getting caught cheating the benefits system with his wife, that really is the first kind of fame he ever achieved.