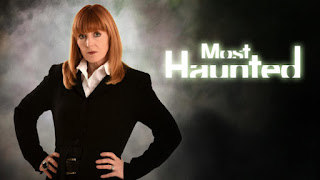 For series 20 I know there are reviews missing, that is due to UKTV shooting their load during Halloween, and airing 70% of the series in a week. So instead of just reviewing those episodes now, I thought I would carry on with the series till it finishes and go back to those episodes after it has to give me something to do, plus I cant be arsed to review 7 episodes one after the other just to catch up.

So what does the Most Haunted team have in store for us this week, lets look deep into Yvette's lingerie draw, and right at the back there is a single used stocking, it is covered in some kind of mysterious congealed substance akin to ectoplasm, it can only be the blurbage for the episode!

"Spook-searching with Yvette and co! At Keithley Bus Museum, the team notices vehicles moving on their own, strange footsteps and something which seems to take a disliking to them."

For a start, I am gonna guess that the thing that takes a disliking to them is the entire audience watching at home, except for pre-pubescent gullible children who bizarrely like to argue with me on twitter that the whole show is real.

Yvette starts the episode telling us we are in a Bus Depot. 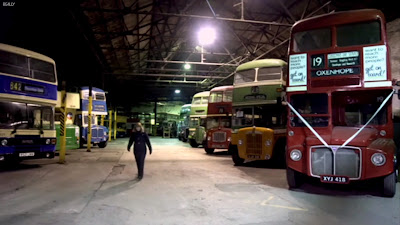 And yes it does seem that we will be getting many of the obvious puns and references. 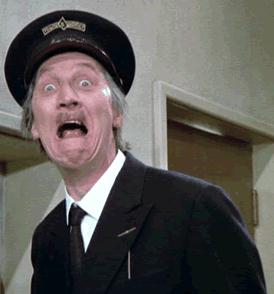 If only the ghost of Blakey could make an appearance.

Please note that the lights in the depot will be on the whole time, so there is no need for fake night vision filters.

No sign of Watson yet, as Yvette describes how people died in hot furnaces. And how a night watchman committed suicide by throwing himself in a giant vat of molten metal. Well that is one way to go I guess.

I think Glen might be a bit of a bus nerd, as he is clearly getting turned on by these old restored buses, so turned on in fact who goes for a cheeky grab, but just misses as Yvette gets distracted by something shiny. 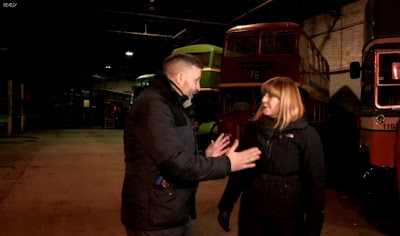 For a fake skeptic, Glen is doing quite good in pointing out the inconsistencies in the various ghost stories of the place. And I would advise everyone out there to actually listen to Glen here as he makes a lot of sense for once. 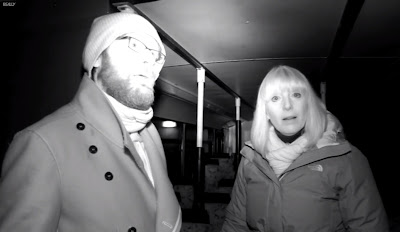 Investigation proper has now started, and straight away they are getting taps, which is incredibly predictable and quite boring.

"Is there anybody there? Tap twice for yes, once for no"

Amusing point where Karl whistles and asks the ghosts to whistle back, but instead of a ghost, a train in the distance blows its horn! Probably the first legit reaction in the history of the show.

Yvette is claiming that the bus they are on is moving, now instead of checking the hand break straight away, they start getting excited and just assume there are ghosts present.

Karl and Fred are off in a different location and getting things thrown already.

Karl whistles again and a faint whistle is heard back, could be anyone present.

Back to Yvette and she has now proudly declared that she is on a haunted bus. Still not checked the hand break.

Worth noting that Stuart is apparently not present. 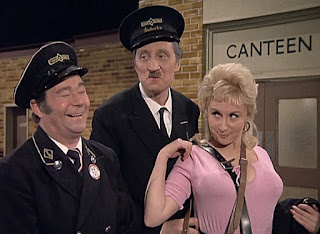 I would say that this is the best that Yvette has looked in years, that pink top really does suit her, although I am not sure about Karl's new moustache.

Just kidding of course, that is a scene from On the Buses 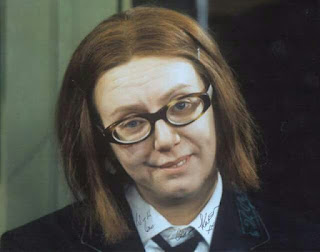 Here is Yvette with her new specs on.

Fred has decided to start whistling to the ghosts, and is hearing whistles back and banging.

Fred is getting a whole scene to himself here, I wonder if he paid Antix a bit more money to get more air time. 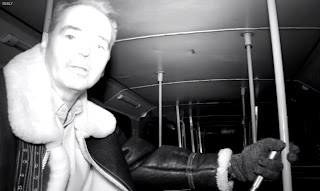 Karl is on a bus now, and can hear steps above him, instead of investigating, he just films the ceiling for a few minutes and talks about it. He is also claiming the bus is moving, but like Yvette doesn't bother to check if the hand break is on.

If the hand break is not on, then the action of people moving within the bus would cause it to move ever so slightly. 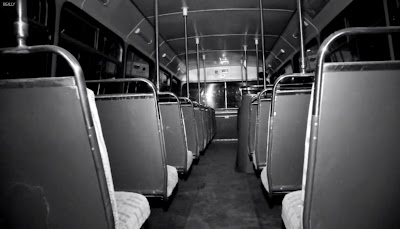 Get used to this shot as you will be seeing it a lot in this episode.
Reminds me of back in the day when I was one of the cool kids who sat at the back of the bus on the way to school. Oh the japes we used to get up to back in the day. Making fun of Wolves fans as they got on, while singing Baggies songs.

27 minutes into the 45 minute episode, and nothing of note has happened.

I am sat here watching grown adults walk about buses talking to made up ghosts.
Who is sadder? Me or them? Answers on a post card to Most Haunted, Media City, Salford.

I genuinely think if you went to Youtube, searched for "On the Buses" and watched an episode of that, you would be far more entertained.

Fred has now decided to call the ghost Jon, he now talks to the camera, to Jon. Hmmmm, almost like he is talking to me here. Very interesting. 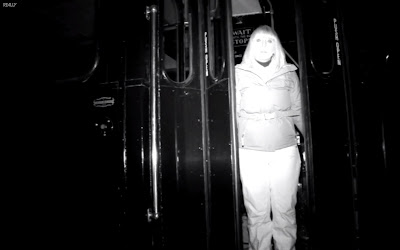 We then get the obligatory argument between Yvette and Karl, we get it every episode, almost as if it is scripted because the fans have said they enjoy it when they start arguing.

Glen has re-appeared. God knows what he has been up to.

Karl tries to make a joke about Yvette always going to the back of the bus, but it goes completely over her head, like most things.

The bus that Yvette and Karl is on is moving, and yes they have not checked the hand break. 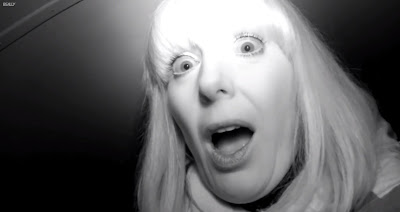 Karl has snuck a cheeky finger up Yvette's bum. Well that was unexpected.

This really is a terrible episode, plenty of knocks, whistles and so on, but the level of evidence is just non existent in this episode. A few things are thrown but as usual all are OFF CAMERA.

All things considered the Bus Museum is not a great place to investigate, just to wide and open, no real sense of tension.

As the episode is drawing to an end, we are getting a few things thrown OFF CAMERA, a bit of running about and that's it, All filler and no killer.

This is easily the worst episode I have seen in years. Hardly any effort to fake anything.

Watch the first 10 minutes to listen to Glen, and then turn it off. You wont miss anything.

I hope that in some way I have entertained you today, if I did why not donate an Amazon Email Gift Voucher to me to show your appreciation