The Truth Behind Most Haunted Series 19 Episode 2.

Boy did my episode 2 review cause me some trouble. If you have been following my Ghost Adventures reviews you will have seen me allude to issues with UKTV, the owners of REALLY who air Most Haunted in the UK. Let me fill you in so you all know what is what.

Basically I had access to raw episodes of Most Haunted long before they are aired, in the TV business we have something called an "Embargo", this means that journalists such as myself get access to something, but in big red writing it will say something like "The following is under embargo until 12:00pm 31st March". This means that no one should publish anything until after that time. Usually this will be a movie trailer, poster, clips from a TV show or film. Often this is due to certain outlets being given the exclusive rights to show the media first.

Now throughout the history of Most Haunted I have exposed and "spoiled" Most Haunted for well over a decade. I have never had a single problem with any TV station airing it. You see the likes of Sky are smart enough to realise that any publicity even if negative will help their TV shows, and if the TV show is relatively small they need every viewer they can get, so they can sell advertisement space.

Now Most Haunted is on REALLY a small cable channel owned by the UKTV network. And for the past few seasons I have spoiled, and exposed the show, and in turn given them thousands of viewers. But suddenly after I published my article on episode 2 I found myself cut out, I get a rather rude email from someone at UKTV going mental because I exposed the show, broke embargo, and published screengrabs. Now I thought this was strange since I did the same for episode 1 of the new series and no one said a word. It took nearly a month for me to realise why.

In the past few days just before episode 2 aired on TV, you may have noticed that every tabloid newspaper in the UK reported on the full apparition caught on film on Most Haunted. Yvette Fielding went on a full media blitz, begging every radio show to have her on. Newspapers reported "Experts are baffled at the footage". 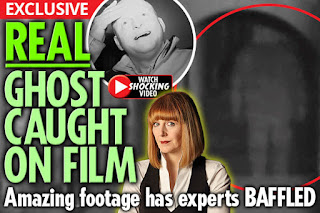 Whats this got to do with me I hear you say? Well, the problem is, this was their big moment of the season. They spent a lot of money PAYING all of these newspapers and media outlets to run the story, to show photos, videos of this ghost, and good old me had already run it all and exposed it as faked.

Now in media you have things called Sponsored Posts, there are PR companies that are paid to "seed" videos, to make them viral, the truth is they are paid a budget, and they ship these stories around media outlets and pay them to promote a video, a story, a photo etc. Sometimes a flat amount is paid, sometimes it is a pay per view situation. Regardless of that, the reason all these tabloids suddenly gave Most Haunted all this attention was because they were paid to do so. It wasn't them reporting on a story, it was them printing a story they were given. Big difference. And guess what I spoiled it, and UKTV were/are furious with me! And I am now banned by them!

As for the ghost footage itself, I stated a month ago it was Glen. I stand by that for a couple of reasons, one is I was told it was Glen by someone who works for Antix Productions, and secondly from watching the unedited raw footage that I had access too, it was pretty clear it was him.

Now some people have suggested it was "Peppers Ghost" an old magic trick illusion, (it wasn't), and my good friend Rob has suggested it was a video overlay effect, check out his site at Skeptics Boot to read his explanation. He could be right? Who knows. The one thing for absolute certain though is that it is not a ghost. And if you want to know my 100% proof for that, well just take a look at this screen grab that airs before each episode of Most Haunted. For those of you not bright enough to understand what this means, it means the show is a Spoof. As Ofcom themselves have stated the show is for entertainment ONLY, and should not be taken seriously! Not my words, the words of the people in charge of TV broadcasts. 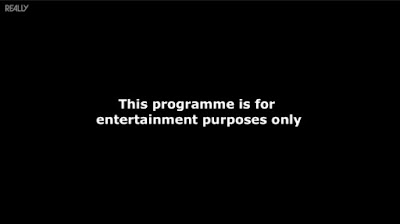 Anyway with all that said, I will continue doing what I do best, I will keep reporting on Most Haunted, because people enjoy my reviews.

And I will do my review of episode 3 later today so keep checking back for that.

That is all for now

Love this site, well done, very funny. That was Stuart or Glen. I watched this and wondered why they were using the camera in a different way, than their usual stupidity, then up pops the 'ghost', it gave me a laugh.

When I saw the headline on The Star I headed straight to your site, thinking it must be referring to the review you did! Great education and insight as ever :)

What’s the point of what you’re doing? You’re purpose is to ‘expose’ and ‘spoil’ a show that already states itself that it’s for entertainment purposes. It’s fun to watch it and that’s why people tune in. Why would you go out of your way and be proud of the fact that you take pleasure in ruining that for people?

Don’t bother replying. My questions are rhetorical because let’s face it, we both know why you do this. Nobody would give you your own show so you have to air your voice by slating others. Pretty sad really...

I started exposing the show because it was claimed to be real. In fact it is me who forced OFCOM to catagorise the show as "Entertainment only" and basically admit that the show is faked and not to be taken seriously.

Unfortunately Yvette and Karl then used this and claimed that they were forced to say the show is entertainment only and blamed non existent EU laws. So despite the show legally being a spoof, they still claim it is real, and sadly there are naive and gullible people out there who think it is real.

Also due to the old days of Derek Acorah this also led to a surge of people claiming they had psychic powers, so I continue to "spoil" the show because not only is it the right thing to do ethically, my reviews on this site of MH get a lot of visitors, and the hope is these visitors stick around and read the more serious articles that expose the psychic industry and so on.

I would much prefer not to review the show and just concentrate on exposing fake mediums, but I need visitors to the site.

I do not take pride in exposing a show that is already officially labelled as a spoof, I just hope that people who previously thought it was real eventually realise through what I do that it is faked.

As for no one giving me a show, well I have never asked for one, I have never written or made a pilot that could then be shopped around various networks, you will never have seen me in a home made ghost hunting show on youtube.

In fact I go out of my way to stay away from being a public face of anything. I get invited on TV shows all the time, I turn them all down. I have no interest in fame and fortune.

If that makes me sad, so be it.

I have been on a most haunted experience with yevett, Karl and Stuart. I know these people work in television and I know this show is there income but yevette is a presenter not an actor after the event i sat with her and Karl and saw the unedited forage you did. If you speak with them about their beliefs and theroys then I am sure you to would see there passion for what they do. They are investigating the paranormal there is no way to prove what they investigate other than not being able to explain the evidence they have caught with a reasonable explanation that it was caused by somthing normal of this world. Therefore how do you expect them to get it right all of the time. If it wasn't for the fact that serious scientists also believed in the paranormal and a relm called the etha scientists who we base physics we know today on then maby i could understand your reason to want to deem all of these shows as fake. We have all lost touch with our spiritual side long ago and shows like this give some people hope that there is somthing else, that the universe is more than our short existance, that there is light and dark and that our thoughts and emotions are more than just a chemical unbalance. Our ancestors built land marks on natural magnetic waves on the earth to harness the energy for spiritual connections and they were supposed to be the more primative but if you think about it are they primitive for having faith in somthing greater than themselves or are we primative for beliving not only the world but the universe starts and ends with us. Wether you create ratings or not you squash faith in the very air that we breath to run down those who dare to find answers to questions most of us spend our lives overlooking.

You claim "yvette is a presenter not an actor"
You do realise she is an actual trained actress right? Like she went to drama school. Had acting jobs and so on. This is historical fact, not opinion. She is an actress.
Not a very good one I admit but still.