Charlie Kelly Goes On The Offence!

Last month Charlie Kelly performed a Facebook Q+A session, I have only just been made aware of it, it was published after I had released part 1 of my analysis of his readings.

At about 35 minutes in Charlie starts to talk about a guy that has a hate campaign against him. He is talking about me. Here is the video, skip to 35 minutes to hear what he had to say, then read on.

So to go over things again slightly, I approached Charlie on Twitter, and asked politely if he had any recordings of readings. Here is the full conversation, you can see I contacted him through my personal @JonDonnis twitter account, so I was clearly not trying to trip him up or pretending to be someone I am not. I believe I was polite too. 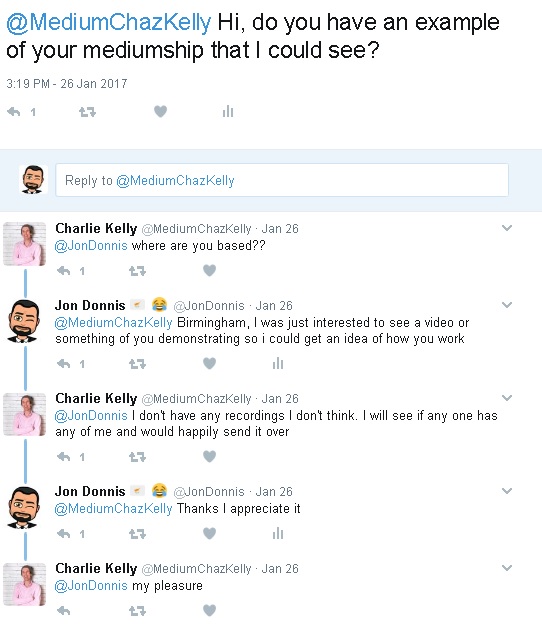 He said he would look and get back to me. He never got back to me. I then found the recording of a show. I had it transcribed, and I analysed every single reading he gave. I NEVER EVER accused him of researching anyone, I have no idea where he got that from. This is a lie. If he can show one time I accused him of researching people, please share it Charlie and prove me wrong.

I suspect that he was told about my article, and then just started making assumptions without ever actually bothering to go to my site.
I have never ever suspected Charlie of "hot reading" mainly due to the fact his readings are so poor, and obviously "cold reading". I spent many hours analysing and showed exactly how he did it. And I have publicly invited anyone to prove me wrong. Nobody has, to this point.
Charlie also claims that if he gave me a full manifestation that I would claim it was some computer generated trickery. And that anything he would do would not be enough for me. Again Charlie you are wrong here. All you have to do is back up your claim of being a medium, and provide proof that cannot be exposed. Simple. I have looked at many of your readings and not one of them did you do anything that was beyond cold reading. Of course you can say that readings are subjective, and that you receive validation and that is all the proof you need. What I am saying is that that is not enough. If you make a balled up tissue disappear, then the person you are performing the trick to, will give you validation that the tissue disappeared, and if they do not know how the trick is done, then they could assume it was real. But someone being tricked is not the same as magic being real.
Also I am not going out of my way to tarnish your name on social media etc. I am just reporting the facts, and backing up everything I say. I am allowing people to see the methods you use, read my explanations of them, and then make their own minds up. My posts on social media have never once attacked you personally, they have only advertised my website, and forwarded people to the articles. That is it.

Charlie also states that I am a keyboard warrior, who is sat at home claiming benefits, You know I don't mind him calling me names, I expect it from him, afterall I have exposed his methods. I do not take insults personally. I stick to the facts, what can be examined. I have no interest in Charlie's personal life, his beliefs, what he had for dinner. All I am interested in is his claims of being a medium, I do not accept his claims as true, so I give my opinion, and i do my best to back that up with facts that people can look at themselves and make their own minds up about.

But to answer both those insults, I have never ever claimed a single penny in benefits in my entire life. But if people do, that is their choice or need, and depending on their circumstances that may be the only way they can survive, so to use that as a way to attack me, is insulting to the millions of people who cant find a job, who are disabled or simply do not have any choice but to rely on Government benefits.
And before you go around making such slanderous comments, perhaps you should think first. There is a good reason Derek Acorah, Colin Fry, Sally Morgan and all the big names I have exposed have never been able to take me down. Sally Morgan successfully sued the Daily Mail you know, yet me she is still running scared. Just saying! Instead of throwing around threats, why not engage with me in conversation, why not explain why I am wrong, and how what you do is real. I am not angry at you, I am not upset at you. You are not a celebrity, you do not make millions, I really would never have even heard of you if not for Cathy from some spirit forum putting me onto you. I am giving you the chance to rebut what I say. I will happily publish any article that you write that exposes my analysis of you as being unfair, lies, wrong, whatever!

Again I repeat, if you wish to rebut what I said about you and your methods, I will publish that for the world to see, unedited. I have no fear of what you could do. I am not ashamed of anything I have written, and I am happy for my work to be analysed by anyone, and if I am wrong I will hold my hands up and admit it.
As for being a keyboard warrior, I can accept that as an insult, but keep in mind when I was exposing Derek Acorah, I went and spoke to him face to face, I have personally gone to spiritualist churches and called out their fraud. So perhaps in some respects I am a keyboard warrior, but at least I do not pretend to talk to the dead, and then get grieving people to pay me for it, for that is a really despicable crime and if the best insult you can give me is to call me a Keyboard Warrior, then I guess I am leading a pretty good life.
Now you also threatened me and told me not to publish part 2, well guess what I don't take threats lightly, so I look forward to hearing back from your legal team!
You wont be the first who has threatened me, and I doubt you will be the last. But keep in mind if you do go down that route, I will respond, I wont run away. I have nothing to lose, you will just waste money trying to take me down, and you will fail, because i am in the right, and your career will be left in tatters. So instead of acting all "Billy Big Bollocks" click the contact me button on this site, and drop me a nice friendly email, and lets see what two civilised adults can do, as part of a conversation on mediumship, and your claims. How does that sound?
I also invite your fans and followers to read through my analyses and point out any parts I am wrong, where I have misrepresented anything. They can reply in the comments sections of both.
Part 1
http://www.badpsychics.com/2017/02/an-analysis-of-psychic-medium-charlie.html
Part 2
http://www.badpsychics.com/2017/03/an-analysis-of-psychic-medium-charlie.html
I look forward to hearing back from you Charlie. And remember, I am a nice guy, I am just giving an opinion on something I do not believe is real.
I criticise Christianity, Islam and religion too. But you don't see The Pope calling me names while he puffs out his chest.

That's a very good analysis of the issue and it'll be interesting if he follows through (my guess not). Have you heard of another medium called Mark Smith? He's from Yorkshire and he gets up to the usual stuff, spirit boxes, going to grave yards etc etc. He's got a YouTube channel called Paranormal x and he does live 'shows'on there! I've commented on his live feed but now I'm blocked! 😀

Billy big bollocks, haha classic. One hasn't heard that in a long time.

Thanks, no he wont follow through, I have made him look a fool, so smart thing for him is to keep his head down and not invite more criticism.

Mark Smith doesn't sound familiar? You could ask on the forum

Glad I could amuse! lol

I dont understand why these people get so aggresive when they are pulled on their so called ability. I have read some of their postings on here, and they are nasty people. You do a very good job defending yourself and the vulnerable from this vile breed and their followers, well done.