NP Paranormal Live - Are they credible? 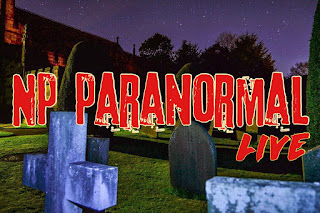 I was recently given a link to look at, and the link was to a newbie group calling themselves NP Paranormal Live. I decided that instead of just dismissing them as just another Most Haunted wannabe group, that I would approach them and ask them to send me the absolute best evidence that they had ever found, in the hope that I would see something I could not explain, or something that could perhaps re-capture my interest in the genre. What happened next was them sending me some truly awful videos, and upon realising that I could see through their pathetic attempts, they tried to give me the run around, followed by just blocking me and being rude.

I offered them help on a genuine level, as someone who has done this for over 14 years, and as someone who has more experience and knowledge in this genre than pretty much anyone else around. I wanted to help them, and perhaps give them some credibility. Unfortunately it became clear to me that they are just another wannabe group, pretending to be professionals, and playing games in the dark.

Lets have a look at the first "unexplained" video they sent to me.
Now let me just say that the last thing I want to do is give them free publicity, but that is an unfortunate bi-product of writing an article on them, one of their most popular videos has only about 1000 views in nearly two years, so I really don't want to just embed their video here, as I would only help them, and that is not my interest here, so instead I have copied the part in question, and I publish it under fair use laws as part of criticism and review.

The first clip they sent me they claimed was proof of a manifestation caught on camera! No one on their team could debunk it, and they are 100% sure it proves the paranormal. The original video is over 2 minutes long, and contains a lot of bad language and not very interesting talk, so what I have done is cut the moment in question into a 20 second clip

The "unexplained manifestation" they refer to is clearly visible. Between the two men, we see what can only be described as the first signs of a spirit entering this world from the other side! Yes it is true! Hang on a second, oh no, I am mistaken, this miraculous spirit actually comes out of the mouth of the man on the right! Clearly he had been possessed by an evil entity, which decided to leave his body through his mouth. You know there are other things that can leave the body through the mouth, there is vomit, spit, air, erm.. if only I could think of something that comes out of the mouth, that kinda looks like an evil spirit, let me stop for a moment, have a quick puff on this cigarette no that is not helping me, hmmm let me try my vape machine. Nope still cant think of anything that could come out of my body that would match what is clearly a real manifestation of a dead creature.

Maybe one of my very intelligent BadPsychics readers/viewers can think of something?

Remember, this was the first video they sent to me as something they could NOT explain, and was an example of some of the best footage of the paranormal they have ever found. I literally pulled a Picard when I saw this video. 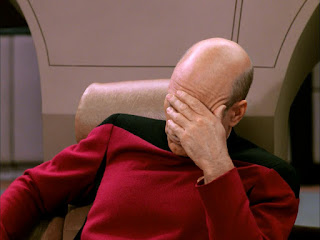 Next up NP Paranormal Live decided to send me an EVP, something that I have said time after time is evidentially worthless, since it is so very easy to fake, has no credibility, and even "EVPs" that are not obviously faked can easily be explained away. Anyway here is the video they sent me, again not the raw audio, but video of a digital recorder playing the EVP, how they cannot understand how stupid it is to present something in this fashion is beyond me, but then we aren't dealing with professionals here are we.

The EVP bit is the bit at the end, you know the bit that sounds like someone breathing onto the microphone.
Now do you have any idea what the ghost is supposed to say? Nope, me either.
But this is where Auditory Pareidolia comes in. For those unfamiliar
"Pareidolia refers to the human tendency to attribute meaning to random stimuli"
So if I was to tell you what was being said by this supposed ghost, you would then be primed to hear it.

Highlight the following "it hurt" now listen again, and see if it works!

That is 100% auditory pareidolia, and not the voice of the dead. Please leave in the comments if you thought it said anything else. Now any experienced "investigator" would understand why EVPs are evidentially worthless, but not NP Paranormal, they present this as part of their evidence.

Now at this point NP Paranormal realised that they were not dealing with some run of the mill internet armchair skeptic. They have given me their 2 best pieces of evidence, which were frankly laughable and easily debunked. So at this point they start giving me the run around. But they did give me one more piece of footage that they could not explain.

I remind you all, that this is the kind of evidence that they bet their reputation on.
Again NOT raw footage, this time it is filming of a laptop screen, now I did ask for the live feed, which they did give me, but when I asked for a time stamp of when it happened, they refused to give me, and instead told me to sit and watch 40 minutes of their investigation to find the same point.
Sadly I actually did that, and I still could not find the matching part.
So all I am left with is the dodgy film of a laptop screen to go by.
If someone from NP would like to give me the time stamp, I will edit this article to include the clearer video.

They tell me to look at the floor.


Towards the end of the video, something moves infront of the camera, hard to tell what it is, but NP Paranormal seem to thing it is a ghostie, most likely it is just an insect, or artifact in the air. But to present this as evidence, to not even cut the clip from the original raw footage, well just shows how amateur this group is.

So there we have it, NP Paranormal have presented there 3 best ever pieces of evidence, and all 3 are a joke. They claim to be "Most watched investigation team on the @Livestream app", well I have never even heard of this app, their average video on youtube gets about 50 views.

Their website looks like it was knocked up in the 1990's by a 13 year old boy. They have only been about as a group for a couple of years, there is a lot of talk of them running paranormal events, ghost hunts and so on, but as far as I can see they have never actually run any such event, outside of their own little ghost hunts that they live stream. There "Tickets" page on their site is empty.

Have you heard of them? Have you gone on a ghost hunt with them, or are they just all talk?

Personally with the lack of intelligence and expertise of this group, I would be very weary of giving them any money.

My advice, based on my opinion of what they presented to me, if you are in Sheffield and you see them advertised. avoid them!