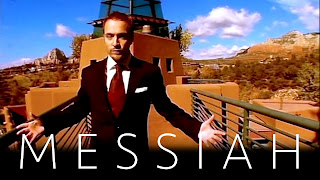 In Messiah, Derren travels around America and showcases his abilities to cast doubt on pre-existing, dubious belief systems under the guise of a fake name and identity. First stop - remote viewing in Sedona.

Messiah is a Derren Brown special originally shown on Channel 4 on 7 January 2005 at 21:00. In the episode, Brown travels to the United States to try to convince five influential figures that he has special abilities in their particular field of expertise: psychic powers, Christian evangelism, New Age theories, alien abduction and contacting the dead, with the objective of getting them to endorse him as a practitioner in their field.

Derren Brown asked a leading figure at a psychic training school to go into another room and draw a number of simple pictures on any topic she wished. After each picture had been completed, Brown would have his prediction of what the picture was of written down by the other members of the training school in the room with him. He was mostly correct, the one slight error being a cross instead of a Star of David (though he did state it was some kind of religious imagery - maybe a cross?). On one occasion when Brown was telling the participant to draw the next picture, he instructed the lady to "let some ideas sail into your mind" and not to go "overboard on detail". She drew a boat on water.