Holly Bell is the co-founder of Sacramento Paranormal Investigation and Research Team. Sounds good doesn't it. Before i go further, lets quote her entire bio, so you can get an idea of who she is.


"I am the co-founder of Sacramento Paranormal Investigation and Research Team. My group has been to a number of investigations but we have been working on missing person cases lately and my own house due to the number of apparitions we have captured over the past year. The amazing part is all of these spirits can only be seen through the reflection in my mirrors in my bathroom. After many attempts to rid my home of spirits I decided to slow down and listen which has changed everything I've ever known about spirits."

We have another self proclaimed expert on the paranormal, they run a ghost hunting group, and put videos and photos on the internet.

Most of the photos are of herself in a mirror, and then desperately trying to find something in the reflection that vaguely resembles a dead child, or demon or something else ridiculous. 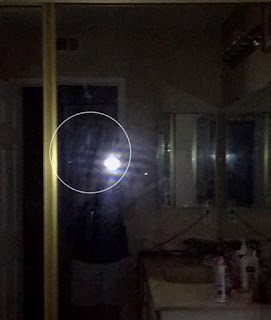 Description with the photo reads
"I am cleaning my tablet and found this picture from 2 months ago. Just another piece of evidence to add to my crazy haunted house file."

Yes this is "evidence" of the paranormal!
Clearly the reflection of the flash has highlighted wipe marks on the mirror, and may you can make out a face if you really squint your eyes, at the absolute best this could be put down as pareidolia, but personally I cant see anything clear at all. If you can please leave a comment. 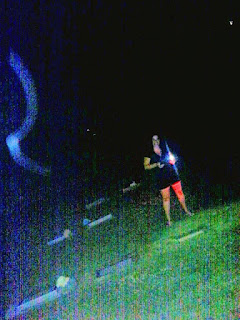 No description with this photo other than it being from a crazy night.
I assume it was posted because of the artifact to the left of the image.
They would call this evidence of the paranormal. I would call it an eyelash on the lense. 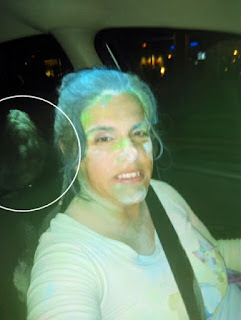 The description reads
"My bud Renee and Cofounder of SPIRIT Paranormal took her family out for some fun and paint balls. When she took a selfie she realized she was photo bombed by the Spirit of a little girl. Her daughter was in the back seat but she is not a blond and she was on the other side of the backseat."

Now most of the photos she shares are the ones in the mirror which are awful, or orbs or rubbish like that.
This photo I really like, as it really does look like a face!
This is another example of pareidolia, he face appears on the head rest of the back chair.
No real explanation here as it is just pareidolia, but it is quite a good one. 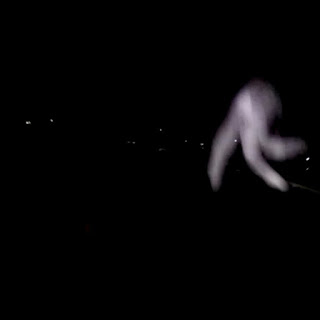 This photo was taken in a cemetery in Vacaville, California. Kinda looks like a claw right?
Clearly this is something close to the lens of the camera and out of the focal range.
Could be an insect, could be a spider, could be a spit end? Could be a lot of things, and in a cemetery too, it's hardly the cleanest of places is it. One thing for sure is that it is not a demon claw.

Anyway you get the idea, they publish these photos as "evidence" of the paranormal, they never offer up any potential rational explanations, instead jumping to the paranormal explanations instead, usually a dead girl.
What this means is that despite calling themselves experienced investigators, they are just uneducated people messing about in the dark. Would you pay to go on a ghost hunt with Sacramento Paranormal Investigation and Research Team when they consider this evidence?

And lastly, you are probably wondering why I titled this article the way I did. Well it is all because of this excellent video.

Have a watch, and ask yourself, is this a haunted plastic bag? I will let you make your own conclusions as to the cause of this. Please leave a comments.

ugh, please, pretty weak "Ghost", why not pull it off altogether?

Oh please stop, i need the loo, lol, so funny.