Yesterday (7th December 2016), Yvette Fielding was lucky enough to go to a spa!
It was all going well until her Ladyship Yvette was annoyed by another client at the spa.
She tweeted out the following to her 52,000 followers

What followed was lots of people attacking this random person, being nasty and so on.
But thing took a nasty turn when she took a "sneaky pic" and published it online.
I have edited the lads face to protect his identity. Yvette did NOT edit it, instead wanting to humiliate the lad. 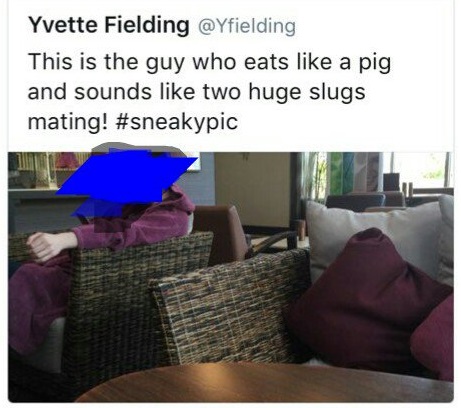 Even Yvette's husband Karl Beattie joined in the bullying, by quoting her tweet and sharing with his 26,000 followers the following. 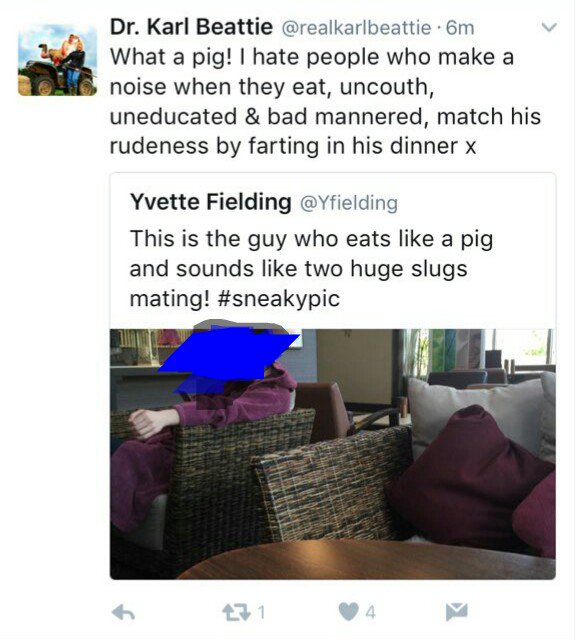 Now the problems began when someone pointed out that this young man might have some kind of disability, or have some kind of special needs. A lot of people were offended that Yvette and Karl would use their celebrity as a way to humiliate and bully an innocent young man on Twitter to their combined 77,000 followers.

Of course after it was brought up that this lad might have some kind of disability, Yvette quickly deleted the photo, but then also went into defensive mode, and even tried to play the victim herself!

Karl even live streamed himself on Periscope attacking people for daring to suggest that Yvette or himself had done anything wrong.

You can watch that video at https://www.periscope.tv/w/1RDGloAanXmKL
I have also made a copy of the video below incase he decides to delete the Periscope video


Karl also posted the following Tweet, again trying to deflect from the fact his wife abused an innocent young lad on Twitter and tried to humiliate him.

Since this all kicked off yesterday a debate has been raging as to whether or not what Yvette did was ok or not. Would it be ok to humiliate and bully an innocent young lad on twitter if he is not disabled? Or is it only wrong if he is disabled or has some kind of special needs.

Is the young lad disabled or does he have special needs? I honestly do not know. But let us look at the facts.
A woman in the public eye, who has over 50,000 followers on Twitter decided to take a secret photo of an innocent young man, in a spa, she then published that photo, along with other abusive tweets with the sole intention of humiliating and bullying him.

At best this was Yvette abusing, humiliating and bullying a young lad, at worse this was the kind of discrimination that has landed certain people in a lot of hot water, I am reminded of the recent case of a model " Dani Mathers" taking a "sneaky pic" of a 70 year old woman in a changing room “with the intent to invade the privacy of that other person”  Dani Mathers is now having to go to trial and could face 6 months in prison and a fine.

Clearly what Yvette did is not as bad as taking a photo of a naked 70 year old woman to body shame her, but Yvette did take a photo of a teenager, with the sole purpose of humiliating and shaming him. And by taking the photo she did invade his privacy, especially if the spa they were in is a private members spa, then there is an assumption of privacy. Her photo could very well have broken the law. And I have been told that police have been informed and are investigating, although I doubt anything will come of it, unless the boy and his family were to complain, but I doubt they are even aware of what Yvette did.

Also Bannatyne Group (Owners of the Spa) are now investigating to see if their own privacy rules were broken. Best they could do is ban Yvette and Karl from all Bannatyne businesses!

Regardless of whether or not he has special needs, what she did was wrong, and instead of apologising for getting things really wrong, she is now playing the victim, getting lots of sympathy from her followers who now claim that Yvette is the one being bullied! Yes the irony there is amazing.

Lets hope that these nasty comments by Yvette and Karl come back to haunt them! (Yes I did just say that)

So what do you think? Leave your comments below.

Vile, hateful language towards anyone that dares say anything against them, says all you need to know about these two.

They truly are awful bulllies

I think you guys are scraping the barrel here. It's a pet peeve and they aren't saying "kill him". It's more a comment on how crap social media is, giving airtime to useless transient annoyances. He may have been particularly vexing, very English that they just seethed and clearly didn't say to the dude! No reason why you guys are making a big deal, non paranormal people can be petty too, hope that's not too shocking an assertion...

The reason we are making a big deal of it, is because they are celebrities (ok I know Z list but still...) and they used their celebrity as a way to bully an innocent young man, who may or may not have special needs.

Also this kind of bullying behaviour has been going on for years, but rarely does it get shown or reported on as people are scared of them. I AM NOT.

People and MH fans in general need to see the reality behind the characters of two people they idolise, that is why I published this piece.

What a twat, just watched the periscope He came across as a complete muppet.
If the food eating was so annoying and disgusting why didn't she ask the bloke to try and eat quietly.
I know why she didn't because she didn't have the balls, it was easier for her to belittle and humiliate him.
They were totally in the wrong, what gives them the right to take a picture of sed person without them knowing and then tweet it.
If the shoe was on the other foot they wouldn't like it.
These are grown adults pffffft and grrrrrrr Shame on them

He did them both no favours with that self obsessed rant, proves what a t-sser he really is

Just watched the periscope, what a disgusting little man Karl is, no one likes bad manners, but these two are beyond belief, what a little t-sspot.

Can this Yvette Frauding sink any lower? What's worse, eating loudly or being a bullying liar? I bet she didn't have the guts to say anything to his face, just take secret pictures and tell thousands of people about the drama of the day. Hate this vile woman. And that Karl Battie's response shows years of bad practice of squirming out of fraudulent trouble and deflecting the blame. Does it matter if the boy was disabled or not?