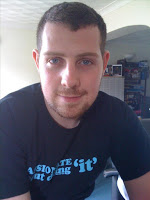 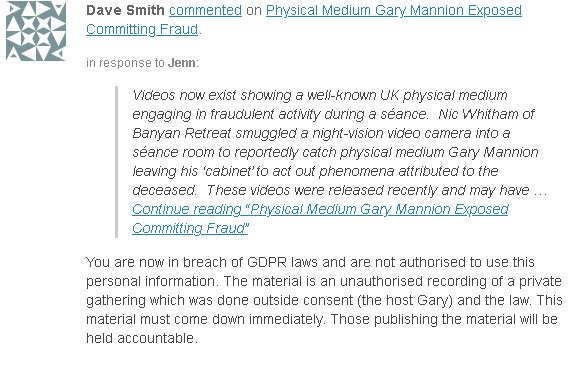 Those are pretty blatant. I thought that kind of thing had stopped since they became widely known. Well done to whoever did it! I've come across phoney mediums, but they only did cold reading. I can't count the number of times they said: "She doesn't like your new curtains. Yes, I know they're not new, she's saying she prefers the ones you had up before, she doesn't like the pattern. Yes, I know they are plain, that's what she's saying, she doesn't like there being no pattern on them" kind of thing. But I can't imagine anyone being able to continue after that filmed expose. That is conclusive. Again, well done!

This kind of thing never stopped.
All mediums are phoney, which is one of the reasons this kind of mediumship is so protected, as it is really easy to expose as shown in the videos.

Yet another fraud exposed, well done Jon. Btw the wikipedia entry for most haunted describes your website as being "now defunct " which obviously it is not, just thought you should know.

Thanks Adrian, I will see if it will let me edit Wikipedia

Is there any trick involved that allows him to see better in the dark, so that he doesn't bump into people etc? If there is enough light in the room for him to see, then wouldn't at least someone in the audience see him too? Especially since he's not wearing dark clothing.

Great question, in fact Lemar Keene a great spiritualist medium from the late 70s who did this exact type of scam and came clean about it talks in his book about how by doing these types of seances over and over and over again, you just learn the layout, people are always sat in the same spot, you literally memorize the whole routine.

Think of it like this. Your own house, if you close your eyes now, can you walk around your house, can you find things, can you picture in your mind where something is? Now imagine practising doing just that over and over again. Eventually you get good at it.

ALL physical mediums practice their art, and people like David Thompson, Stewart Alexander and other such frauds, all do the exact same trick, some will get caught, but they will always have an excuse, much like Mannion does.

So yeah the secret to the trick is practice, simple as that.