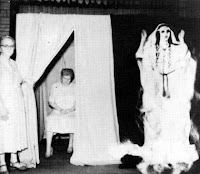 Yes it is true! Physical mediumship, seances, manifestations from ectoplasm, all of that can at last be proven 100% scientifically without any danger to the medium!

Let me put you all into the picture, for over 100 years, mediums have sat in the dark, and conducted seances. While in the dark, and when I say dark I mean pitch black, or sometimes with a dull red lamp turned on and off. A medium will sit behind a curtain, and then ectoplasm will exude from their orifices, and by orifices I include nose, mouth, ears, anus and vagina! (Yes that is what spiritualists have claimed), and this ectoplasm will manifest into the dead. So it could be a full figure, or just a disembodied hand, sometimes the ectoplasm would pick up objects and float them around the room, or even speak though a spirit trumpet.

Now of course all of this sounds ridiculous, and in 100% of cases whereby it has been filmed either on purpose or secretly, it has shown fraud. Either the medium stood up having escaped his bonds and waving the things about or even pretending to be the dead spirit himself, or an extendible rod has been used to control the flying tambourines or whatever. Or it has shown that these manifestated spirits are no more than dolls, that are being manipulated by the medium or an associate.

The excuse has always been that these are frauds and real mediums produce real manifestations, so where is the video of the real manifestations? Well the problem is that ectoplasm is a sensitive "material", and that any exposure to light can cause the ectoplasm to retreat at speed back into the medium, and cause horrific internal damage. Although there is not a single documented medical case in history that shows any such thing, this is what the spiritualists claimed.

So along came infra red filming capabilities, surely this was the answer! Oh no wait, ectoplasm doesn't like infra red either! Now lets ignore the science of infra red because well it is everywhere and comes off everything, and its a bit too "sciency" for me, and despite the fact that scientifically mediums have no excuse to claim infra-red can affect ectoplasm since it is a nonsense claim, lets still take it at face value. So what can we do?

Well here is the answer! Science has finally given spiritualists the perfect tool to film in full HD, in full COLOUR, and in complete pitch black conditions! And without any of those annoying infra red lights!

I present to you the Canon ME20F-SH

It is released in December, and yes will cost a lot of money, but just imagine, you have the chance to be the first medium in history to categorically prove spirit manifestation in the seance room. There is literally no excuses left now.  This camera can film IN PITCH BLACK in FULL colour! and in HD!

No more grainy dodgy footage, you don't even need to use a silly red light!

Now of course if no mediums buy this camera, and no footage of ectoplasm is filmed, then once again I have been proven right and it's all a load of crap! So any mediums wont to prove me wrong, and change the world in the process? Some how I think not!

"The camera is able to capture full HD colour video in pitch black conditions with an ISO of 4,000,000"

It's all very convenient, isn't it Jon, the claims so ethereal with a vanishing nature like much of ufology.
Gullibility is the curse. Human fraud is the plague.
Had to get that out of my system and where better to share my thoughts than here?

Well the lack of spiritualists jumping down celebrating the fact they can finally prove the afterlife is surprising!

Not going to happen.

Don't be so negative!
Although of course you are right