EXCLUSIVE REVIEW: Most Haunted S02E02 (Tatton Old Hall) - The one where not a lot happens.

Yes I am back with another WORLD EXCLUSIVE Review and Spoilers of Most Haunted, this time we are on episode 2 of the new season at Tatton Old Hall.

Before I get started I wanted to address a few people who moan about my grammar in these pieces. This is just my site, I write as I feel, and I make no money from doing this. I have limited time to do anything these days, so instead of concentrating on the odd typo or grammatically incorrect sentence, just try and enjoy my reviews for what they are. The world is already full of pedants, don't be a twat and moan about stupid stuff. That's my job! :D

Here is the official blurb for the episode.

Thursday 11th June, 10pm
S2E2/10. Tatton Old Hall
Really’s terrifying series continues as Yvette Fielding and the team return to the Old Hall at Tatton Park in Cheshire, a location notorious for the unexplainable events that occur there.

Built in the 15th Century the house’s previous residents and visitors claim to have experienced a frightening strangling sensation or to have heard a guttural growling noise in their ears. From the ghostly tales there appear to be two eerie presences at the hall, the first is an unknown woman who has allegedly been seen on many occasions, and most alarmingly, a ghost called Tom, who has a dark reputation. Can they finally uncover the identities of these two figures?

As I mentioned in my review of episode 1, Mel Crump is gone, and her replacement is Leah Walton. I want to say again here at BadPsychics we support Leah and we encourage all of the BadPsychics readers to do so as well. She is the only genuine person on the show, who isn't in it for the fame and she is paid less than anyone else. So if you see anyone out there giving her grief on social media, stick up for her, remember we like to stick up for the underdog here, and no one likes a bully.

On to the episode and we start off with the usual history lessons and so on, I prefer to skip past this bit, as really doesn't interest me.

Skeptic and wannabe TV star Glen Hunt starts off talking with Yvette, and is trying to dispel Yvette's fears about the hall. Yvette has investigated Tatton Old Hall 4 times in the past, ad Glen tells her to forget everything she has done before, has that can influence her.

Glen does give some good advice to his credit, but his smirk is so annoying, that and the fact we all know he is being directed by Karl, kinda makes his whole spot on the show and utter waste of time.

Eammon Van-Harris is back with his EVP nonsense. We also have Mr Moneybags Fred Batt mooching about too.

As they are just talking, off camera right near where Karl is stood there is suddenly a noise. Instantly Glen has a look on his face of "seriously guys stop taking the piss".

Karl waits for everyone to look away and then does it again. Poor Glen he wants to be a TV star and he is forced to put up with this nonsense.

Here is a quote from Glen "It always seems to happen just as I am not looking"!

Yep there is a reason for that Glen. I wonder how long he will last on the show, as surely he gonna admit the show is faked on his radio show or something. 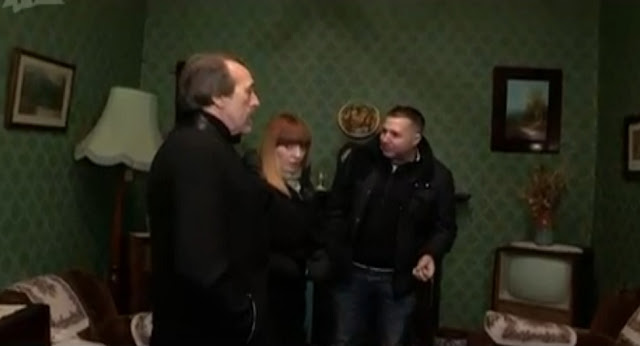 Yvette now starts talking to the ghosties, who reply to her questions with knocks. I wonder where Karl and Stuart are at this point? Glen still cant stop smirking, he knows what's going on, but cant really accuse anyone cause he has to protect his pay check, and that is the biggest problem with having any skeptic on the crew.

It seems apparent very quickly that things will keep being thrown off camera, usually right near where Karl is stood. Of course no video footage, nothing! This is why people hate Most Haunted so much, cause the fakery is so obvious.

No sign of Leah Walton yet and we are 16 minutes in.

Over to Eammon and his ridiculous and utterly pointless EVP machinery, and surprise surprise he already has some ghostly sounds, of course all are easily explainable by anyone with half a brain, but of course the random noises are met with amazement and so on. 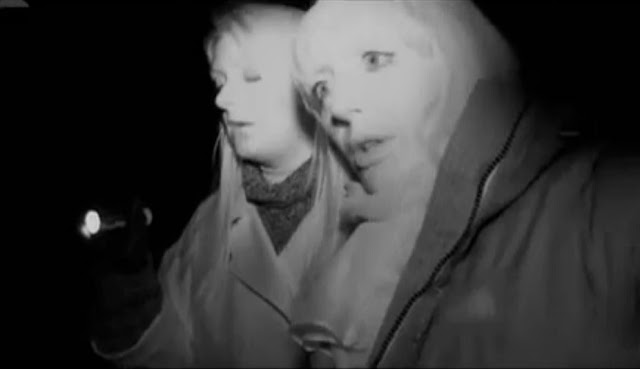 In our regular segment of "Coatwatch", Leah is sporting a much simpler coat compared to Episode 1, a lot less fur it seems.

"Sssshhh what was that"

You know I really hate it when Yvette says that.

It has also become clear that Leah has her own catchphrase of "f*ck me", it does get bleeped out though.

Poor Leah is terrified as usual. Yvette obviously loving the fact she has Leah there to wind up and make look foolish.

And we now get a ridiculous minute of Yvette and Leah running about outside in the dark, scared of the ghosties and the noises that the EVP machine makes. The only thing moving back faster than Yvette and Leah is Karls hairline! So with them running about like children, we cross to Karl with his declining hairline, and he is talking to himself in the dark.

Did you know he once pretended to be a Samurai! Yes really! Then all these Samurai experts called him a fraud and exposed him. Google it if you want a laugh, it is all quite funny. Of course this was before his Most Haunted days.

We've not seen Stuart yet strangely. I hope he does get featured at some point as not the same without him throwing stones about. 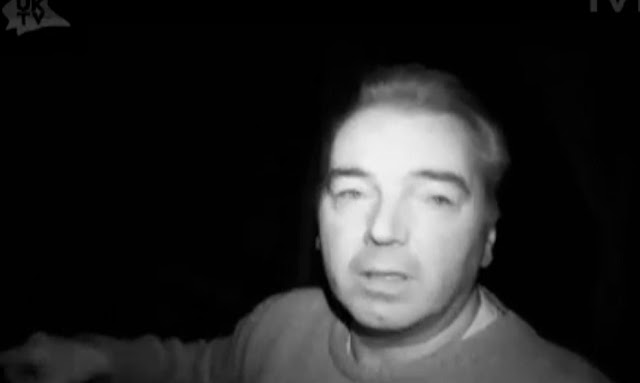 There is actually a moment here whereby Karl switches the light off on his camera when he wants to film himself, then needs to turn it off again when he films elsewhere, but claims it is the infrared is is switching on, yet clearly there are shadows, and they are really just using filters!

If you believe for one moment that it is genuinely dark, just remember we live in a health and safety industry, no one they would be allowed or get insurance to wonder about in truly dark conditions!

Wow this episode is boring, although Stuart has now appeared so hopefully he will throw out some tears again, fall over or so something interesting.

Everyone is in a room, and Yvette hears a whistle, yet on the replay I swear it looks like Glen did it, watch it if you can closely.

As usual no video of the spoon or any cutlery from start to end is shown.

So they decide to start throwing cutlery down a hall way and ask the ghosts to throw it back, when this doesn't work, back to whistling at the ghosts. Again nothing happens, so they split up to do separate investigations.

Blimey this episode is hard to watch, so tedious.

Stuart on his own in a room, and clearly throwing stuff around. Sometimes less is more Stuart you really need to learn that!

Some more sillyness with the EVP machine, usual audio pareidolia whereby someone says what they thing it sounds like, and then you feel like you can hear the same words, but even then its a real stretch. Basically they just seem to get a lot of screeching background noise, if that impresses anyone, then I really think you need your head examined.

Towards the end of the episode a chair seemingly falls, although as usual you don't see it on camera, and only Stuart is there, why wouldn't they just put say 20 stationary cameras all around the location? Instead they just carry hand held cameras and film themselves most of the time.

Either way the episode finishes, with nothing of interest caught on camera, and a complete waste of 46 minutes of my time.

I'm off to the pub, I need a beer after that!

Worst episode in a while!

oh boy, I just love the comedy approach you take, makes watching it worthwhile, remembering your comments at the appropriate places is priceless.

Thanks Susan, I appreciate your kind words

These are so funny! Coat watch! Sounds like a David Attenborough series! Hahaha

Just watching the "NEW" Most Haunted on UKTV play
Missing the old days of Derek's Possessions.
Not liking Fred (disappears when things happen, funny that) Batt.
Good to see Karl and Stuart up to their old tricks again

I've just seen this episode. Wot a larf! I believe in the paranormal but this just takes the piss! There was one point where something was thrown, but did the camera point in that direction? Nope. It stayed pointing at the team. And as you say, why aren't cameras all over the place? The producers can afford it, and cameras can be tiny so lack of space is not an issue. And I wish to God those women would stop screaming! Letting the side down. Jeez! The whole thing is puerile and destroys any chance of real paranormal investigations from being taken seriously!