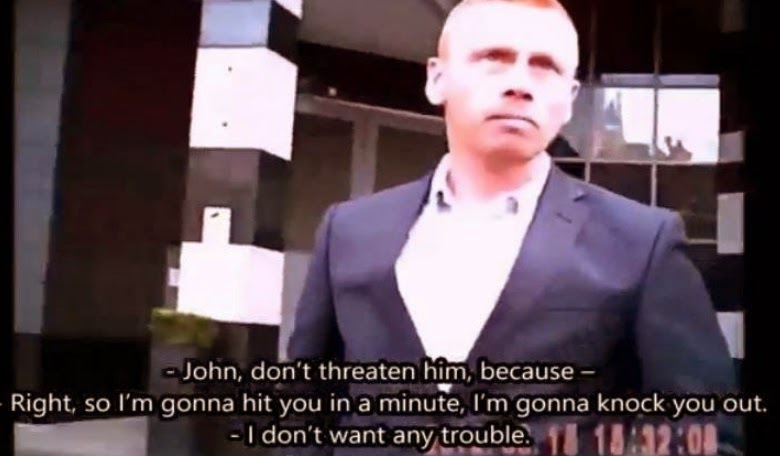 From Mark Tilbrook:“As I explained in the Guardian on 7 October, 2014 (http://www.theguardian.com/science/blog/2014/oct/07/campaign-psychic-sally-morgan), I decided earlier this year to leaflet outside various psychic stage shows, encouraging members of the audience to ask themselves questions about psychic ability. My first three visits were to shows by Sally Morgan, and on each occasion her husband John Morgan approached me. I found him to be threatening and abusive. After being threatened during my first encounter with John Morgan, I felt it necessary to have a camera with me when leafleting, to record events and provide evidence of the threats I faced. This footage shows what happened on the third occasion, at the Shaw Theatre in London on March 30, 2014. I’ve subtitled the video as accurately as I can make out, and you can make up your mind about his behaviour after seeing it for yourself.None of this has stopped me from being determined to continue leafleting at psychic stage shows. This is why I have been working with the Good Thinking Society to hand out more leaflets at psychic shows throughout October 2014. You can find out about 'Psychic Awareness Month' at the Good Thinking website (http://goodthinkingsociety.org/psychic-awareness-month).” 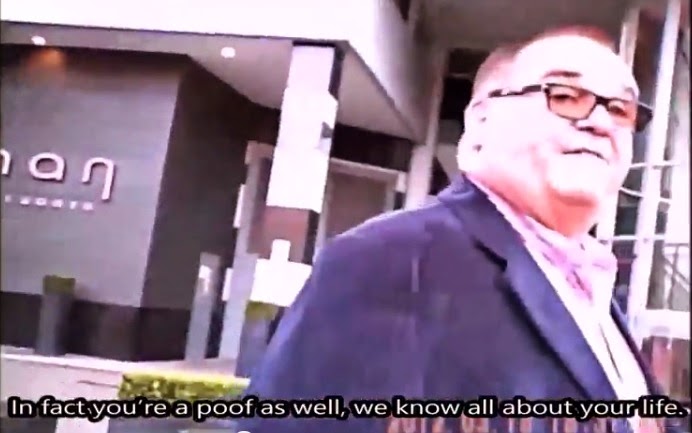 Here they directly libel Chris French by calling him a liar, and then use racist terms while trying to think of Simon Singh 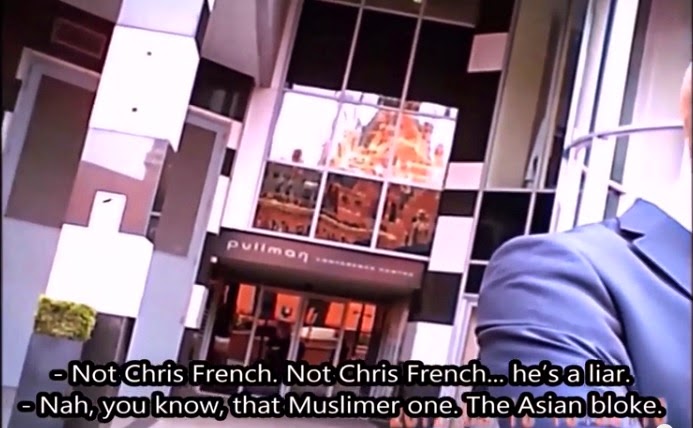 
UPDATE:
Sally Morgan has released a statement, a rather pathetic one at that. Afterall isn't she supposed to be psychic? Didn't she see this all coming? Her racist, homophobic husband making these comments?

SME Statement
Sally Morgan Enterprises would like to apologise for any offence caused by the material. Since April 2014, Mark Tilbrook has targeted Sally Morgan’s live performances; handing out leaflets to audience members. On several occasions theatre staff have had to call the police in order to get him removed.

Given the abuse Sally has endured over the past three years, which have included severe death threats and incidences of stalking; Sally was left fearing for her own safety once again.

Due to the continual presence of Mark Tilbrook and John Morgan’s ever-growing concern for Sally, he reacted angrily and out of character.

Sally was not aware of the comments made in this video. She is very upset by the events, does not condone any of the behaviour and can only assume that this was the cause of persistent hounding that lead to this altercation.

Although the Psychic Awareness month hosted by Good Thinking Society has come to light in recent weeks, the original leaflet given out by Mark Tilbrook contained different information which both Sally and SME felt made targeted references to her and not psychics in general, hence why legal advice has been taken.
Posted by JD at 18:01

The Guardian to host the video (mind you further mainstream coverage could bring the vile woman further publicity) & take a copy to the police making a complaint. They would be brought in for questioning on threats of violence & homophobic abuse which is a crime. If you haven't already you're an idiot.

Just hope Mark Tilbrook does go to the police, and at the least gets Morgans husband questioned and at least charged.

Should have read Mark, you're after exposure so ask The Guardian...

Seriously stop divving around Mark, go to the police this weekend so we know you're serious.

Put a spanner in the freakshow of that repulsive character & family members shown.

They're quick enough to involve the cops when it's you, return the favour, complain to the cops with your video evidence.

Death threats would seem to be a bad idea; there's nothing stopping you from haunting Sally forever as a ghost. Can we get some kind of petition in which we all pledge to haunt Sally if we are murdered by he husband?

I don't know British law, but in the US, your tape would be more than enough for you to get a restraining order against the two guys in the video, in addition to asking a DA to entertain a charge of stalking, since they admitted "knowing all about you."

Then, sue her and her company for Intentionally causing emotional distress, and move the court for full discovery of ALL financial data, phone records, email, cell data, web data and written correspondence. You don't need an attorney to do any of this, but it will cost her a fortune to defend.

And remember, truth is an affirmative defense against libel.

Well I know Mark has had some legal advice, so will be interesting to see what he does and how far it takes, it it was me I would take them for every penny they have

Sampling replies to Morgan's carefully worded statement posted on her Facebook Page, she tries to imply to readers (who knows cannot separate or read between the lines) that Mark made death threats, stalked & made Morgan fear for her safety diverting the crimes in question. Whilst their team are controlling which comments go to the light, not surprised to see the usual praise, support & mentality from all the One Show type viewers who would still support Morgan even if she revealed that her act is all an act (revealing common sense).

Many sceptics (or regular people who use common sense) go on about how they use warm & cold reading techniques. On occasions certainly but in my experiences they don't bother as they don't need to. Cold reading is effective enough for the believers. As long as 20% of their generalisations are on the right lines, that's proof enough for them. And yes during their lives believers will get a reading (interjected with reading their body language & other misses they quickly forget) where the "medium" is spot on, will reveal stuff they "couldn't possibly have known". This is just mathematics. It would be abnormal if mathematics didn't prevail eventually. After all we all eventually guess 4 numbers on Lotto, trip over, break an expensive object & have something "remarkable" that strands out every 5 years or so. Those "spot on" readings being "remarkable" because deep down even the believer (target, victim) knows it only happens once every 5 years. That should tell them something but it doesn't. Think how many times you did get 4 numbers on Lotto.

Whilst Morgan has effectively spread this disease ("mediumship") around to susceptible vulnerable groups for years so far she's managed to turn this & the publicity in her favour which is always the danger when certain sceptics aren't as controlled. Leafleting is just littering as nobody ever takes note (but he meant well & tried a different tact).

Nevertheless readers should share this link with gay advocacy groups as they will have legal knowledge & be able to take appropriate steps as well as "psychic mediumship" & paranormal groups for their information.

The truth is out there but the truth is always using your common sense to realise when you're being manipulated for someone else's gain. The government, mainstream media & "Sally Morgan Enterprises" all have an agenda.

An Enterprise is a business. A business is a competitive cutthroat entity out to make money using marketing & public relations. Marketing & public relations are visual tricks & slogans (such as Psychic Sally On The Road or Colin Fry's Voices From Heaven tours) & words to decisive (using scripts from PR advisors, spin doctors & solicitors).
The tricked & deceived are the believers who fall for it. The believers are the voters politicians put pressure on to give them the go ahead for wars etc. & people with the money they & enterprises are after.

I refer to these believers & people who follow trends as Clones. They are in effect the same person!

Jon can you change that typo of "cold" to "hot" where I say "warm & cold reading techniques.

SUE THESE THIEVES!
To actually DO something positive . . .
http://epetitions.direct.gov.uk/petitions/70539

ANYONE claiming to be psychic is in one, or both, of only TWO states.
1) A CON ARTIST.
2) MENTALLY UNWELL.
http://epetitions.direct.gov.uk/petitions/70539
How many of the con artists display the disclaimer, “For entertainment purposes only”?
In any event, they should not be permitted to influence the feeble-minded or vulnerable people who might believe such nonsense!
Whilst most of them look and sound incredibly stupid to those with more than two firing synapses, one can only assume these thieves they simply don’t care because they are making so much money,.
Trying to con others is one thing but, if you are trying to fool yourself, you need urgent help.
(Incidentally, if YOU are one of the many people who genuinely believe in such garbage, I defend your absolute right to believe in whatever nonsense you chose, no matter how stupid. However, it is highly recommended you seek urgent help immediately.)
NOW, at last, YOU can actually DO something positive! Click the link above and sign the petition!
Join the campaign to stop these evil individuals stealing from so many such unfortunate individuals. Email your M.P. and request the issue be raised in parliament to prohibit these thieves from advertising or performing.
If ALL thieves should be imprisoned, why does the government condone this huge (and growing) group of con artists stealing with impunity? They should also be imprisoned and their vast profits applied to support victims. It’s nothing short of legalised theft!
The truth is posted everywhere that these con artists should be in PRISON like ANY con artist so isn’t it strange why they never try to sue me if they claim they really possess such a supernatural skill ? !

Bob I can't get on board with a petition describing the people we're ostensibly trying to protect as feeble minded or stupid - apart from the well established fact that intelligence isn't much help against being fooled, this sort of language is going to alienate the people who can make a difference - the audience and customers. Mark Tilbrook's actions are so admirable because he's reaching out to people respectfully.