Before I begin, if you haven't already you can review my World Exclusive reviews of Episode 1 here and Episode 2 here.

Right then onto Episode 3, this is the second part to the Newton House episode.

We start off as they mean to go on, with silliness around the Ouija Board, again quick reminder that Ouija was invented by businessman Elijah Bond, and had nothing to do with the occult until the first World War, and that Hasbro own the rights to it these days!

Welsh heavy metal band, Bullet For My Valentine are joining in again with the festivities, I really feel for these poor guys that the only PR gig he could get them was as guests on Most Haunted! I've listened to their music and its pretty good, so a real shame they have to sit through such nonsense, including watching Yvette push a glass round a table!

As I watch the pathetic attempt at Ouija manipulation, you'd think someone, anyone would come up with a simple protocol to prove its a load of rubbish, for a start blind fold them, I actually think they did that on a Live show once and of course they got no words spelled at all!

The lack of a proper Skeptic on the show is quite sad, but we all know that Ciaran was just a paid actor playing the role of Parapsychologist on the show and was directed by Karl Beattie, so even if they did have a proper skeptic, he would just do what he was told regardless. Also I don't count Dr John Callow, mainly due to the fact he is just reading from a prompt at the end of the show!

Towards the end of the Ouija board nonsense, with Yvette whistling and so on, suddenly out of nowhere (when I say nowhere I mean from Karl Beattie), a metal cup flies past Stuart, and amazingly it was not caught on camera!

The lack of any Crump 10 minutes into the episode is sad, they have a true star in Melanie Crump, but her popularity will surely send her to the job centre, as we all know that Yvette hates anyone more popular than her!

And if like me you think The Crump is the only reason to watch this new series of Most Haunted well you can like a fan page for her on Facebook here.

Interesting moment while Karl and cameraman Chris are off investigating a room, whereby Super Samurai warrior Karl is hiding behind Chris cause he is so scared! Oh hang on a moment that whole "Karl is a Samurai" thing was all debunked and proven to be utter and complete lies! lol. I almost forgot about that!

I wonder if Chris could be the new Stuart! Nah that will never happen! There is only one "Unknown Stuntman" in Most Haunted, and in case you forgot here is our world famous compilation video of Stuart


Anyway back to Most Haunted and Karl and Chris are begging for the ghosts to rock a rocking chair, as expected nothing happens, so they try to get the ghosties to make contact through a disconnected radio, and of course sodall happens.

Fred Batt is probably the biggest disappointment to the new series, he really doesn't add anything at all. Not from a historical interest position or from the position of "demonologist" They really need to get a proper medium on the show, as at least that will give me something to expose.

It did occur to me that during this and the last episode, pretty much all of the noises could easily have been made by rats which there undoubtedly is at Newton House.

Lets just put into perspective what it is I am watching.
Grown adults standing about in a low lit room, calling out and speaking to ghosts that do not exist. This truly is ridiculous.

Much like the previous episodes a lot of noises are picked up in the editing room after, funny that! Almost as if they have been added post-production! 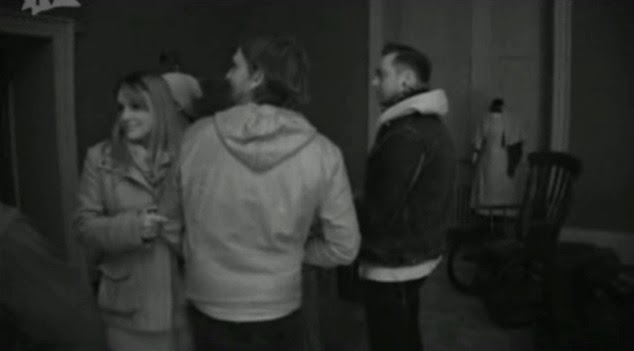 No reason for that, other than need to get The Crump some more publicity! She is surely the only person in the crew not in on the scam, she genuinely seems concerned in some parts!

Stuart has been suspiciously quiet in this episode, other than having a metal cup thrown past him, he hasn't done anything. I am guessing since he pretended to faint that he may have fulfilled his contracted fakery for the day!

Yvette starts doing a weird chant (some ancient Hebrew prayer chant), at which point one of the Bullet For My Valentine boys is mimicking her from behind, really funny moment, they are obviously getting a bit fed up now and are just entertaining themselves. I wouldn't be surprised if they start throwing things about.

In what must be a first for Most Haunted while Fred and Karl are investigating a corridor, when Fred is looking through a hole in a door, a pine cone is suddenly "thrown" obviously by Karl when the camera is facing away. They pick it up and put it where Karl blatantly picked it up from and ask for it to be moved again, and of course nothing happens! But I must say first Pine Cone on Most Haunted!

Newton House does look to be a great old building, lots of corridors and rooms, literally a ghost hunters wet dream!

After some stones are dropped, Yvette declares that it was definitely poltergeist activity! Well done Yvette for remaining impartial!

One of the more amusing parts of the show is where one of the Bullet For My Valentine boys decides he is picking things up from the other side! He even manages to keep a straight face when describing that these things just come to him!

As we get towards the end of the episode, we have something else thrown just as Karl turns the camera away, this time a candle stick, the problem with Karl obviously throwing these things, is that his reactions really give it away. Karl and Fred do not make a good tag team, Karl really needs Stuart, but alas Stuart is off hiding somewhere it seems and the show really suffers without the ham acting of Stuart to liven things up.

Out of the first 3 episodes the second one is easily the most entertaining, the first episode is boring, and the third one is just a bit silly in parts. Of course the wannabe ghost hunters out there will lap it up, the Yvette fans will claim it is all real, and the rest of us will just roll our eyes and remember back to the days of Derek Acorah.

The episode finishes off with what they claim is the most compelling evidence yet of paranormal activity! which is basically a locked off camera filming an old wheelchair apparently moving on its own, to me the way the chair moves kinda looks like its being pulled with some fishing wire, it just doesn't move naturally whatsoever.

As usual Dr John Callow speaks sense at the end, but stays away from accusing any of the crew members from faking, and he doesn't even mention the wheel chair moving, I wonder if any comments about that were edited out for obvious reasons.

Either way it is the same old nonsense, just without a medium.

Woo folk will love it, skeptics will roll their eyes, and the rest wont give a toss.

Poor episode and nowhere near as entertaining as the second episode.

This week the Most Haunted team carry on their exploration of Newton House in South Wales.
Newton House’s main structure was built in 1660 and many believe it was built on cursed ground and the lost souls that wander the halls have been there since before the main house was built. Each room and corridor is supposedly inhabited by different spirits; haggard old women, crazed murderers and the ghosts of children are just a few of the ‘poltergeists’ that are believed to be living within the building and they are seemingly all ready to play with and scare Yvette, the crew and her very special guests, heavy metal band, Bullet For My Valentine.

Certain rooms in the house seem to have a very high energy and the team are faced with nausea, flying objects and even verbal threats they believe has come from some of the ghosts. One movement caught on a fixed camera even means the whole team’s beliefs could be altered forever. With alleged spirits and souls galore Newton House is sure to be one of the team’s toughest challenges yet but with all the danger it begs the question – will they all make it out alive?

Just the normal stuff then!! Will research this ground and see what I find!! haha

"Newton House’s main structure was built in 1660 and many believe it was built on cursed ground and the lost souls that wander the halls have been there since before the main house was built. Each room and corridor is supposedly inhabited by different spirits; haggard old women, crazed murderers and the ghosts of children are just a few of the ‘poltergeists’ that are believed to be living within the building and they are seemingly all ready to play with and scare Yvette, the crew and her very special guests, heavy metal band, Bullet For My Valentine"

The Yvette fans will claim it is all real? They wouldn't even recognise the term "claim". Nevertheless all her fans & SNU spiritualist church goers will believe every single second. Their brains simply switch to some unrecognised (to most) mode when the skeptic offers his shaped & directed words at the end. But these people are just victims beyond rationale & help. They'll go along with dousing, goblins, leprechauns, garden gnomes, dwarves, anything being real.