Skeptic vs Believer - Which one are you? 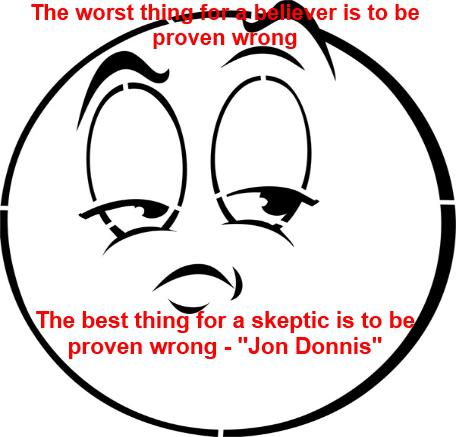 Yes !
If the evidence shows conclusively that the facts on a certain subject are different than I thought they were, my view on that subject MUST change to reflect it.
It's happened to me before and I even felt that awkward feeling of defensive bullshit, but smiled and took a deep breathe instead of making up shit so I could still feel right, as if the incorrect conclusion that I had previously thought to be true was still ... actually ... sort of true.
No, I felt so much better then because I was aware of what was real on the subject. I had been wrong before that and the other person had helped me to be right, all I had to do was accept that the good evidence showed something else to be true. Now, as a result, I know more than I did and I thanked that workmate for helping me.
Scientific skepticism rules !

As a die hard believer I eventually woke up and realised what a load of trash WOO WOO is. I have never EVER had a medium who has been able to pick up on ANY of my family names and you wouldn't be able to guess them. What's all this..."I have someone here with a J name" - what? You die and forget your name? Or, you know many people with a J name...who the chuck are they talking about? Or, someone's birthday in June...well I know six million people with a birthday in June, who are you talking about. I have a male figure here? Size, name, who? It could be your dad. WHAAAAATTTTTTTTTTTT I just dropped him off at the Co-op???????? and the list goes on. Those who want to believe will always believe...whats the saying...no amount of evidence is ever enough? Well you actually have to GIVE some evidence to prove it...take the test...and finally, looks like when I die...I'll forget my name and just keep shouting "M"...it begins with "M goddamn it"...

Great to let my thoughts be known on your terrific blog. I'm not a Forum man (still not sure why) but hey, if anyone ever gets anything out of any of my comments, i'm glad.
Reading the newer comments here, i've been forced to ask myself, what the hell leads me to believe things, what tips the scales far enough that I actually believe something to be true.
The truth is that one thing never can.
Evidence (and I mean good evidence, not some fanciful anecdote). If this new evidence comes with a proper theory, a model to be tested, some way to show that the theory has some actual guts to it.
Then, yes, I may research further and see what else has occurred because of this theory and model.
If one or more reputable scientific journals has published the theory and test results, then yes, the model of the theory-maker is taken more seriously by the scientific community.
It can happen (and has been the case in history), that certain theories and test results published by reputable scientific mags have been officially retracted. In other words, just when I thought that the facts had been shown different to what I knew, they were retracted and shown by mature, scientifically responsible minds, to be based on bad evidence, then all-of-a -sudden they were removed and disavowed by the normally accurate group who published them in the first place.
You, Jon Donnis, already know all of this but it may add to my previous comments and allow even less room for misunderstanding than might have existed before.
The whole process, theories, models, testing, publication by reputable scientific journals, then months or years without retraction of the original publication, can seem too much, too long, too many words and too much bother! I get this and used to think the same stuff myself (people would probably be surprised at just how unscientific Woody's earlier conclusions were).
But this is how we learn, holy shit! If the method of discovering the truth were easier, there'd be a lot less of the paranormal and supernatural crap (that people seem to love so much) floating around in the media. We need critical thinking, skepticism and doubt, to keep building upon our collective knowledge of what is shown to be true!
Else we will slip into another dark age of crap where all culture and society and advance is limited by what people dream and say, instead of what can be shown and properly shared among us.
I had to get all of that out of my system, thanks for reading and all the best, folks.

P.S. Jon you will be sure to let everyone know if there is ever good evidence to show that the theory of psychic power actually has some basis in fact, won't you? (Since absolutely NOTHING has been shown to support that theory in the past ! )

If I found psychic abilities in someone I would be shouting louder than anyone else, I could make a fortune from such a discovery!

I think it was Penn Gillette who made a great point, if all of science was suddenly forgotten, removed from history, eventually it would all be discovered again, in the exact same way, the same scientific conclusions would occur.

However if religion was suddenly wiped out, it would never come back the same again, it would always be different.

This is all you need to know about science and religion and how one is true and one is made up.