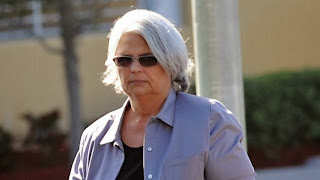 Marks was immediately taken away to jail, and faces a possible 20 years in prison when she is sentenced on Dec. 9.

On Wednesday, federal prosecutors wrapped up one of the most bizarre trials in recent history, asking jurors to suspend cynical notions about people who would give millions to a fortune-teller.

Instead of judging the victims — even a woman who became convinced she was destined to marry heart-throb Brad Pitt and revered diplomat Colin Powell — the jury should instead focus on how Marks preyed on desperate people who believed she could help them deal with dead children, bad marriages, unrequited love and health problems, prosecutor Larry Bardfeld said.

In closing arguments of the $20 million fraud trial, Bardfeld addressed the skepticism that has silently permeated the month-long trial. “Who would be foolish enough, gullible enough, naive enough or stupid enough to give large amounts of money to a fortune teller?” Bardfeld asked.

But, he insisted, that isn’t the question jurors should ponder when they begin deliberations today.
“The question is what was going on in these victims’ lives that they would fall prey to this outlandish scheme?” he said.

Read More at
http://www.palmbeachpost.com/news/news/breaking-news/jury-finds-psychic-rose-marks-guilty-on-all-14-fra/nZ8CG/
Posted by JD at 22:23