The following is a video reporting on the incident by Meridian Focus.

“Those events lead some to accuse Colin Fry of fraud. But his explanation was later accepted by leading figures in spiritualism. He had agreed to talk to Focus about his career at his home in Hayward’s Health but when he found out one of our questions was about that controversial séance he changed his mind. He shouted at us, told us to leave and called us dishonest. He also threatened us with legal action if we mentioned the fraud allegation in this programme.”

Colin Fry was exposed by The Psychic News originally.
Here is a scan of their own report. Click image to enlarge

Originally going under the name of Lincoln, after being exposed by The Psychic News, he started going by the name Colin Fry.

The "Trumpet Incident" happened back in 1992, over 20 years ago, yet still Colin Frys TV show is repeated regularly on cable TV channels, and he still performs in front of thousands of fans each year.

I will leave it up to you the reader to dissect all of this information and make your own mind up, but I will ask you this question, if Colin Fry's career started with fraud, did it ever stop?

And why does Colin no longer do public demonstrations of his physical mediumship?

Before I go, here is a rare photo of Colin Fry supposedly in a trance during a seance, that stuff coming oiut of his nose and ears is apparently Ectoplasm, any resemblance to rolled up toilet tissue is purely coincidental! 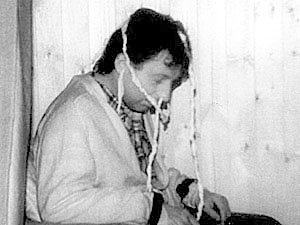