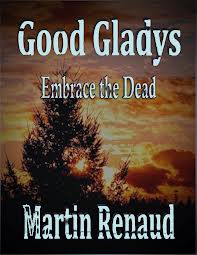 It was an easy to read book, ideal for a read on holiday for instance.

I liked the main character "Sauce", he had his problems but curiosity got to him and he took on the investigation with a lot of encouragement from Dara.

The plot is unusual and there are quite a few twists and turns which are unexpected.

The main characters were all good and fitted in well with "Sauce". I did not like the inclusion of the two young boys in the abduction though, it left a bad taste to the story, although that is just my own personal preference, each person will take something different from this part of the story.

I think there could be further stories to be written involving  "Sauce" and "BT" working together. I would recommend this book to anyone that likes a light murder/mystery, without all the blood and guts of some books that are out there.

A murder mystery with a psychic twist.

News reports that the famous psychic Good Gladys is missing coincide with the brutal stabbing of her business manager. Gladys's daughter Dara asks an old friend, private investigator Byrne Aase, to help find the murderer. She claims that the man the police have in custody is innocent. In fact, she believes that the accused is her mother, having been transformed into a man during a seance gone awry.


“Remember that day we left for St. Martin?” asked Dara, sitting down on the edge of the sofa. “I took you home, just before we left, so I could pack a few clothes for the trip. You met Mummy and talked with her while you waited for me.” Sauce turned and raised his eyebrows. “Good,” she continued. “Do you remember the first thing you said to her?”
“No, but I hope she took offense.”

“It was perfect. Mummy asked you some self-aggrandizing question like, ‘How do you like the place?’ You looked her in the eye and—oh, I loved your answer so much it was etched in my memory. You said, ‘Bankruptcies and broken families from your thievery is all I see.’” Dara paused, and Sauce smiled. “You despised what she was doing as much as I did. But like me, you didn’t hate her.”

“I didn’t? You don’t know that,” challenged Sauce. “I certainly knew enough about her, from the talk shows and celebrity gossip in the news, to hate her. ‘Good Gladys, psychic to the stars’ they call her. I can predict the future better than her. Believe in Gladys’s ability to talk with the dead and she will stay in your life until you are out of money. Gladys is the kind of person people either love for the wrong reasons, or hate for the right ones.”
“I never said you loved her. No, I agreed with Mummy that you are much more useful to us than a fawning admirer or a starched-shirt, lawyer-for-hire, yes man. You understand her.” Dara smiled.

Sauce tried to resist the manipulation. “Here’s the best I can do. Leave, and I’ll mull it over. I promise I won’t say no until I call you tomorrow.”