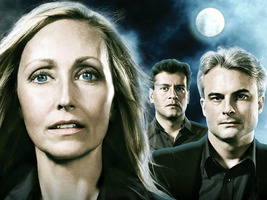 The second season of Court TV's psychic detective series "Haunting Evidence" opened with an inquiry into the disappearance of Natalee Holloway, a young American woman who vanished while on a trip to Aruba. Her case made news around the world, as the police investigation failed to locate her body. Three young men who were questioned in her case were all released, and the case remains unsolved, two years later.

Psychic profiler Carla Baron, medium John J. Oliver and paranormal investigator Patrick Burns all traveled first to Natalee's hometown, where Baron and Oliver visited the honor student and cheerleader's high-school, while Burns visited with Natalee's mother and picked up some articles of clothing which had been worn by Natalee in Aruba.

The team next went to Aruba and tried to retrace Natalee's footsteps, beginning with the nightclub, Carlos and Charlie's, where she had partied on the night of her disappearance. They next went to a "fisherman's hut" on a beach which was said to be the last place that she had been seen. The program relied a good deal on recreations of what the psychics were saying had happened, showing an actress portraying Natalee dancing and drinking, then later leaving with a young man, etc. Carla began to feel uncomfortable with the images she was picking up, and more than once broke off her psychic session.

After both Carla and John visit the sites, and even view the area from the air, they are ready for an attempt to contact Natalee's spirit. Patrick's equipment, including a "tri-field" detector, is set up on the beach by the fisherman's hut. Both Carla and John are going to do the attempt at the same time. The editing of the program seems to show them alternating with relaying their impressions, almost taking turns telling the story, and one can't help wondering if they were not improvising with each other. As the story continued, Patrick indicated he was getting "spikes" on the tri-field. He soon offered each psychic an article of Natalee's clothing to assist them with their contact sessions.

The story both Carla and John tell is that Natalee was happy in Aruba, and had enjoyed being with her friends. The she had met a young man, a local, at the nightclub. He may have drugged her drink, or she may had overindulged, but at any rate she was escorted from the club by this man, separated from her friends. He may have had companions with him, but sent them away and took Natalee to a secluded place on the beach, where he raped her when she refused his advances. Later, he found he could not get a response from her, and went away, leaving her to die. He returned several hours later and removed the body. It was possible that a "person in a position of power" helped the young man cover up the crime.

John described the suspect's features in detail, and the program showed us a sketch artist's version of the man' face. They recapped their points for the police, suggesting they re-interview people at the nightclub for witnesses to Natalee's departure, look into the theory that she was drugged, look for the man in the sketch, and look for someone who knew him and is ready to "crack" and tell the truth.

It is clear that Natalee's family lack closure, and that they are cooperating with this program. While it would be wonderful if the Haunting Evidence team could actually help solve this tragic case, it is difficult to watch this sensationalized episode and not wince at the dramatics.