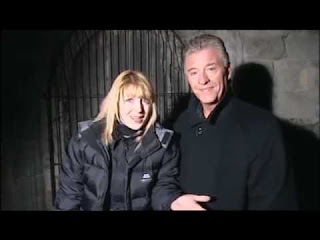 At the 3-night live Most Haunted in Essex earlier this year, the crew were on the trail of Matthew Hopkins, Witchfinder General, across the 'witch county' of Essex. First stop was Canewdon, a tiny ancient, rural village near the River Crouch. This village has a long history connected with witchcraft; thirteen witches were said to live in the village at one time.

Although pleased that Most Haunted were visiting Canewdon, as numerous hauntings are alleged to take place in the village, causing the police to put up road blocks every Hallowe'en to stop would-be ghosthunters and other such people from entering the village and disturbing the peace, Matthew Hopkins never actually visited Canewdon or had any connections with the village.
Regardless of this, miraculously, Derek picked up on Hopkins energy while in St Nicholas' churchyard.

Only 2 witches were executed from Canewdon; Rose Pye in 1580 who is buried at the nearby crossroads and Cicely Makyn in 1585 and re-arrested and executed in 1590.

Not only this, but on the third night of the programme, Derek became 'possessed' by a man claiming to be on of Hopkins evil gang named Francis Mills. He swaggered around and letched at Yvette Fielding, saying at one point 'I see your breasts, woman' before lunging at her and being dragged off by security.
Frances Mills was indeed one of Hopkins vile posse of witch hunters, but not a man - a woman! She was very feminine and had she not been so, she would have been accused of witchcraft herself, probably. Now unless Frances Mills was a seventeenth century cross dresser, we can assume this was a mistake, but as always I will let YOU make your own mind up on this one.

So there you have it. Hopkins was never at Canewdon, so why pick up on his energy and Frances Mills was a woman. How wrong could he have been.

Help for this article provided by forum member Irishbanshee